I started out liking Topps Lineage - not enough to build it, but I did enjoy opening up the 7 pack blaster I picked up at Target - but then I got to 4 additional loose packs that I picked up and realized I was growing bored w/ the product.
2011 Topps Lineage Blaster
Damage: $21.19 (incl PA Sales Tax) for 57 cards
Highlights: 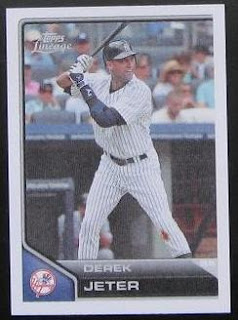 2011 Topps Lineage #TCS2 Derek Jeter
The pick of the pack was the above Derek Jeter Cloth Sticker.  I like the idea of including cloth stickers in Lineage but I was bummed the stickers look exactly like the dull ass base cards.
Regardless it's a big summer for Mr Jeter and according to the pack odds and my rough math, there is roughly 1 Jeter cloth sticker per case of Lineage. 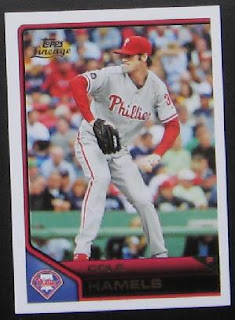 2011 Topps Lineage Cole Hamels
There was only one Phil in my blaster.  I am in a bit of a Phils slump right now :(
75 Minis 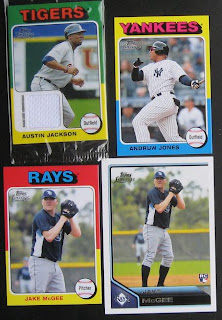 Obviously the hit of Topps Lineage are the 75 minis.  I presented the Jake McGee base here for comparison.  Austin Jackson was my bonus relic.
Other Highlights 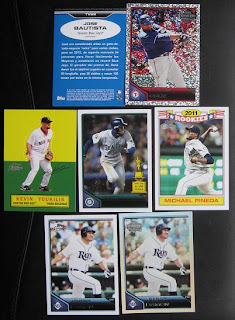 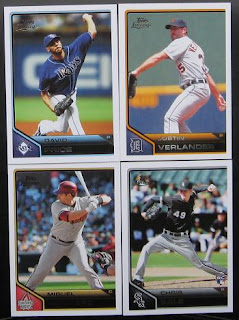 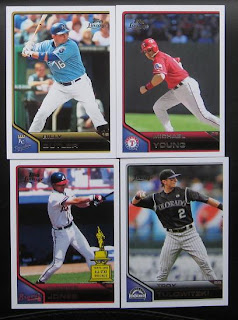 1B Billy Butler, 2b Michael Young (listed as 3b here, but I didn't get a 2b), 3b=Chipper, SS Tulowitzki
Outfield 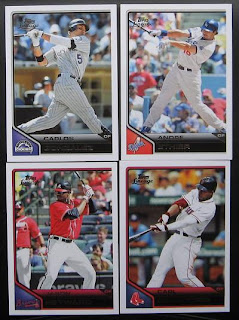 Cargo, Either, Heyward, Carl Crawford
Report Card
Base Set Design - Meh - would have been nice to see heritage card stock.
Base Set Checklist - thumbs up, I like short sets w/ Hall of Famers heavy - I would have liked to see a few more prospects, but I didn't get to really check out all of the prospects in this set.
Base Backs - hate it, but I was wondering has another set had such noticeable color variations on the back based on the players team.
Photography - Solid
Inserts - Interesting - Like 75 Minis and the popups - but Topps really mailed it in by using the same pix and giving them all the same back - except for Venezuelan which they gave identical fronts.
Final Grade
Thumbs Down - The more I see this set and the less I like it.  The boring base design combined w/ the mirroring of it for the inserts is a crummy combination.
Reply to Ember, Paul (H USA)
Send

The worst part of the base back is that each player's color is slightly different than the others. I have my Rockies team set and they range from deep purple with Ubaldo to a bluish with Helton. It is very annoying.

Would you be interested in trading the Austin Jackson relic card? I don't have a Phillie relic card, but I do have cards of Andrew McCutchen, BJ Upton, and Aramis Ramirez.

RobbyT the Jackson is yours. I'll swap it for the McCutchen. Will send you an email