David Price  and RA Dickey were just announced as this years Cy Young Award winners.  Tonight I would like to take a look back at a Phillies pitcher that won the award several times. 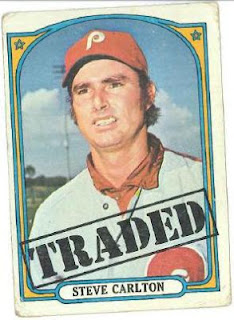 2012 marks the 40th anniversary of Steve Carlton winning the award for his 1972 campaign in which he recorded 27 of the Philllies 59 wins.  It was the first of four Cy Young awards for Carlton.

I am sure the 1972 Topps Carlton Card is a favorite of many Phillies fans.  It represents one of the best trades in Phillies history.  Rick Wise for Steve Carlton.  Wise was a very competent pitcher, but no one knew at the time of the trade that Carlton would go on to put up a Hall of Fame numbers.

This card is from my childhood collection which explains the rough but acceptable condition.  I likely inherited this card from an older kids collection or acquired the it via trade.  For purposes of this column I have added the 72 Topps Carlton Traded Card to the FTC analysis below.  The card is a High number and trends in the $5-$10 range.

Phungo has been running variations of Hall of Fame Profile since our inception.  I have intended to revisit the For the Collector (FTC) portion of the posts to see what happens regarding card pricing for the different players.  Time has finally passed and today we are going to look at the FTC for Steve Carlton.

The original Phungo HoF profile for Steve Carlton was in July of 2010.  I ran the same or similar ebay Queries recently and found the following


Basically we found that the pricing of Steve Carlton cards has gone down.  However there appears to be some Hi-End cards available in this 2012 survey that were not sold in our 2010 sample.  I look forward to seeing how these numbers look in a few more years.

Email ThisBlogThis!Share to TwitterShare to FacebookShare to Pinterest
Labels: Cardinals, For The Collector, FTC, Hall of Fame, Phillies, Steve Carlton

And the first appearance of 'Traded' cards by Topps (not counting the Clay Dalrymple and Donn Clendenon cards in the 1969 set).