There have been a couple of Marvin Miller cards produced in recent years notably in the 2005 Topps All-Time Fan Favorites set.

However, I think this card that doesn't even cite Marvin Miller says more about him, the Reserve Clause, Free Agency and the Marvin Miller Legacy then any other card: 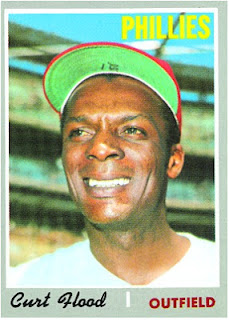 Curt Flood never played a game for the Philadelphia Phillies.  This wasn't because he wrecked his knee in spring training or got cut before he made the team.  This was not because he was a Big Time draftee that couldn't hit a curve or a pitcher who's arm hit the wall and ran out of bullets. It was because Flood was of the opinion that he could not be discarded by the St Louis Cardinals to another franchise without his permission.

And Marvin Miller agreed with him.

Great Photos aren't just pictures, there beautiful works of art which tell stories that stretch their physical borders.  Similiarly there are a few baseball cards that live in a different stratosphere.  Most of these are Star Cards of at extreme values.  There are a few others that may be considered commons, but have details that raise them to this Star level.

The 1970 Topps Curt Flood card is great for a couple of reasons.  The biggest of which is the text tells us he is a member of the Phillies, a team for which he never intended to play. In the photo Topps shows Flood's headshot with just the underside of his cap bill so no logo is present.  This way Topps could place the card on any team - which is sort of the way the Cardinals felt about him.  On the underside of the caps bill you can see the upside down 21, The uniform number Flood wore for the Cardinals.  Cool little elements that elevate a card of a minor star 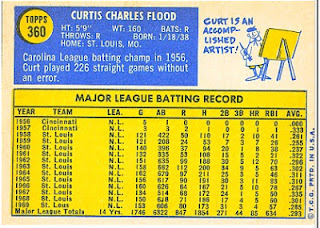 The cartoon on the cards reverse revals that Flood is an accomplished artist.  It is almost a clue that Curt Flood is a creative person that may think a little differently and is the kind of a guy that may challenge the system.  Just another cool detail about Curt Flood's 1970 Topps card.

It is true that Marvin Miller did a lot more for baseball and baseball players then getting Curt Flood out of Philadelpha and kickstarting the Players Union. But for me he will always be tied to Curt Flood - The Philadelphia Phillies are a footnote in the story and the 1970 Topps #360 Curt Flood tells a lot of that story in 9 square inches.

Dayf over at Cardboard Junkie has a post collecting Marvin Miller Tributes here.