The story is known well - Mike Piazza was picked by the Dodgers in the 62nd round as a favor to Tommy LaSorda who was childhood friend of Mike Piazza's father. The pick was the 390th of the 1988 draft.
A few weeks ago Mike Piazza was inducted into the Philadelphia Sports Hall of Fame.  He never played for the Phillies, but athletes from the Philadelphia area are also considered for the Local Hall. This winter Piazza will be on the ballot for induction into the National Baseball Hall of Fame for the first time. There are many first times on the 2013 ballot with impressive credentials, but questionable issues both on and off the field - Clemens, Bonds, Schilling Sammy Sosa. Piazza's name and steroids have been linked a few times - The BBWAA voters will need to figure out what that information means to them.
Piazza's career numbers are very impressive and for me are hall worthy.  427 Homers, 1335 RBIs, 2127 Hits and a .308 BA from a guy who was primarily a catcher.  He was Rookie of the Year in 1993 and finished 2nd in the MVP voting twice (1996 - Ken Caminiti, 1997 - Larry Walker).  He was a 12 time all-star and took home 10 Silver Slugger awards.  Piazza does not have a World Series Ring, but he was part of 5 playoff runs for 3 different teams (Dodgers, Mets, and oh yeah the Padres).  As a member of the 2000 Mets Piazza played in the Subway Series versus the Yankees and Roger Clemens. 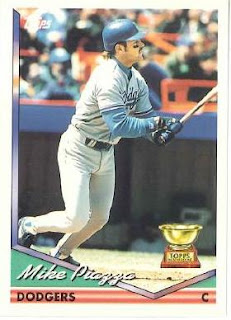 1994 Topps #1 Mike Piazza
1994 Topps
Perhaps because it falls in the years between and UbiquiBlogging this set doesn't appear to come up often.  Regardless, I think it is pretty decent looking and could use further observation. The photos are interesting - an off center home plate border focuses attention to the image without being too showy.  The team name and player name are both listed in a minimalist yet clear fashion. It is from last years that Topps did NOT use foil on their base cards (there is a parallel set - topps gold - that has foiled player names). It's a simple design that complements that helps feature the photo - Does a card design need to be any more?
For the Collector
I am not sure where I picked up this 1994 Piazza card but suspect it came out of a dime box.
There is a rookie cup on this card, but it is not Piazza's rookie card - It his his first Topps Solo card - he appeared on a 1993 Topps Rookie Catchers card that also includes Carlos Delgado.

Mike Piazza cards from 1992 include issues from Bowman UD and Fleer.  Two Piazza card that appear to garner some coin on ebay are the Fleer #U-192 and Bowman #461: