Zach over at Autograph Cards recently mentioned that he had Autographs representing every MLB team that has existed since 1952 except the Boston Braves.  This got me thinking that there can't be that many Boston Braves that are still living.  According to baseball-fever the number of living Boston Braves alums is around 20.


One of those 20 players is Gene Conley who also played a few seasons with the Phillies. 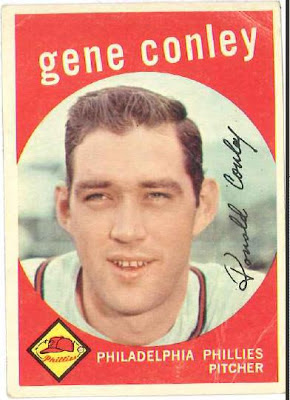 I have been wanting to feature Conley in a column for a while.

I never knew who Conley was till I returned to collecting about 5 years ago. I have always been interested in 2 sport players and quickly found out he was one when I started collecing 1950s era cards.  In addition to being a Major League Pitcher the 6'8" Conley was also an NBA player.  He was a member of three Boston Celtics NBA championship teams from 1959-1961 - His teammates would have included Bill Russell.  He was also a member of the 1957 Milwaukee Braves who won the World Series.  His Teamates with the Braves would have included Hank Aaron, Warren Spahn, and Eddie Mathews.

As far as Certifed Autos from major card makers, Conley is contracted with Tristar-Obak and has a couple of fine looking signatures in the 2009 set.  There are two of the Obak autos that have finished recently one at $21.99 and the other $32, The cards were serialed to 50 and 25 respectively.

If certified autos aren't your thing this link contains some vague TTM information - Conley appears to sign for $5 via check, but based off of other articles I read I am not sure the address is current.

This Facebook Page has some really cool pix of items from Conley's career.  It appears to have been started by a fan, but it looks like a Conley family member may have addes some photos.
Posted by deal at 8:11 PM