Johnny Damon to play for Thailand in the WBC


I realize that I am one of the few people that is interested in the World Baseball Classic.  I admit that the event has it's issues and it inteferes greatly with the MLB season, however I don't think the the WBC is entirely without merit.
My mom was born and raised in Thalland, I have been fortunate to visit there several times - most recently in 2007. I am very excited to see that Thailand will be part of the 2013 WBC, even if it is only in next weeks Qualifying round.  Thailand's bracket is hosted by China-Taipei (Taiwan) - who I would think is a strong favorite to win the pool.  Regardless, Baseball is a funny game - in a smal round robin tourney One strong pitching performance coupled with an error or somebody crushing a hainging curve can significantly alter the outcome.
Last month while Team Phungo was on the road word got out that Johnny Damon will play for Thailand in the WBC. I am sure most folks responded with a shrug and/or  "What the hell is Damon's connection to Thailand?".  Like myself Damon's mother is of Thai heritage but he grew up in here in the states.  Beyond that we have very few similiarites - He is a Major League Baseball player, I blog about Baseball Cards.  He can grow a full beard in an afternoon, that would take me a decade. 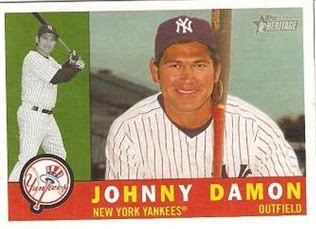 2009 Topps Heritage #163 Johnny Damon
I found out about Damon's Thai connection relatively recently.  Fortunately I have always enjoyed him as a player (except when the Yankees beat the Phils in 2009) and have built a small collection of his cards. He is a good player who appeared on the national stage frequently with the BoSox and Yankees. He is an engaging personality, I hope he and the rest of the Thai team have some success in the WBC - The game will grow in Thailand and maybe someday there will be a true Thai ballplayer in the majors.

If I read the WBC schedule correctly Thailand and Damon will play their opening game on Wednesday November 14th.  It appears the MLB Network will be carrying games either on TV or On-Line.  Stay Tuned.  We will have significantly more coverage of the WBC than reader interest.