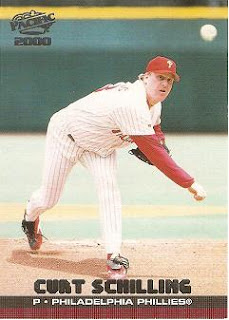 Curt Schilling announced his retirement via his website today. He has had an excellent career, but I like most Phils fans have mixed emotions about Schill.

The Phils won and NL Title with him and then had to jettison him from a poor team. He spent more time with the Phillies then he did on either team for which he won the World Series.

Schilling is now retired, not sure he stays retired......But one thing I am sure of, even if he remains retired, it won't be the last we see and hear from number 38. I am sure he will show up on plenty of TV and Radio.
Posted by deal at 1:33 PM

I'll never forget Schilling sitting in the dugout with a towel over his head while Mitch Williams was pitching in the 1993 World Series.