Jamie Moyer has been a terrific addition for the Phillies the last two years. He is a local athlete who grew up in the Philadelphia suburbs and played his college ball at St Joes. Through perseverance and a lot of hard work he has carved out a 22 year career without having what would be termed "devastating" stuff. In 2009 he got to live the dream; he pitched in the World Series for his home town team and won. 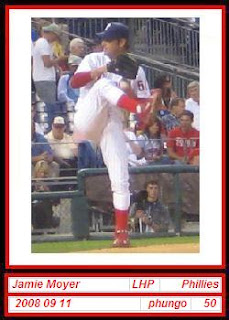 Moyer signed a two year contract this off-season, if he pitches through the life of the contract he will pitch in four different decades. His career record is 246-185. That is 61 games over .500, which is comparable to recent retiree Curt Schiling's 70 games over .500.

This picture was taken during a September 11th game versus the Milwaukee Brewers. This game was essentially the game that kicked off the Phillies memorable playoff run. Going into the game, the first of a four game series versus the Brewers, the Phils were four games behind Milwaukee for the wild card lead. The Phils won the game then went on to sweep the series. The four wins were the beginning of a 13-3 Phillies finish. The Phillies, of course, remained hot and went 11-3 in the Playoffs to claim the World Championship.

For the additional (and extensive) Team Phungo coverage of this game click here.

Jamie Moyer has become quite the folk hero here in Philadelphia. He is great to the fans, interviews well, and was a key player for the World Champions. That made him an easy pick for the cover of the Phungo card wrapper. I am sure Moyer won't be offered many coverboy opportunities, so that was another reason I elected to put him on the cover. Folks who I have sent Phungo Cards to have gotten a B&W wrapper, since I was to cheap to print a color one - here is what the color wrapper looks like. 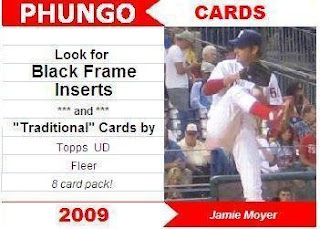 I initially sent these out to anyone I traded with last year or received cards from via a contest or blogfriendships. I have appreciated the many great comments and reviews that the Phungo cards have gotten and fully plan on putting together a 2010 set.
Posted by deal at 8:57 PM