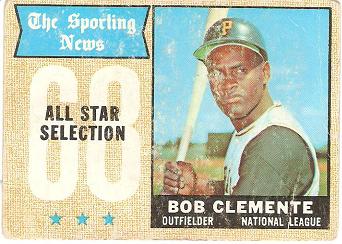 I wanted to get this post out while the WBC was still being played, specifically when Puerto Rico was playing.


The Clemente's story is well documented. At the time of his untimely death the career .317 hitter had just recorded his 3000th hit. He was a 15 time all-star, who won an MVP award. He spent his entire career as a Pirate and was a member of both the 1960 and 1971 World Series Championship teams.
It was very enjoyable to go to Puerto Rico and see the enthusiasm of the fans firsthand. Roberto Clemente is definitely celebrated as a Baseball Hero in Puerto Rico. His number is retired at Hiram Bithorn Stadium, and there is another stadium in Puerto Rico which bears his name.

Carlos Delgado was a member of the Puerto Rico WBC team and asked the Clemente family to allow him to wear Roberto Clemente's #21 during the Classic. 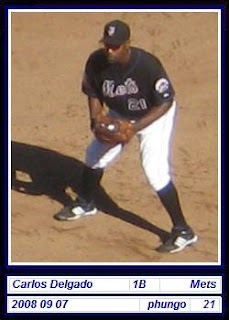 This the Phungo card for Carlos Delgado. His card number is 21 to match his uniform number which he wears to honor the memory of fellow countryman Roberto Clemente.

A few months back I ran a column on the film "Grand Canyon" and its connection to Roberto Clemente, you can read this entry here.

More Hardball wants to know which city has the hottest fans in Major League Baseball. We started out by going division by division in each league, then the past two weeks were the playoffs. Now it's time for the World Series of Hotness with the Philadelphia Phillies vs. the Los Angeles Angels.