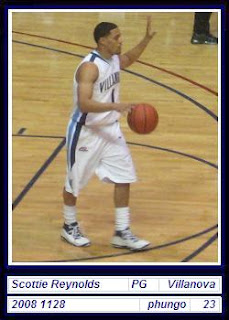 Tomorow Villanova plays their first game in the 2009 NCAA tournament. Scottie Reynolds will be leading the Wildcats at the point guard position. Above is the sole basketball card in the Phungo 2009 collection. Scottie Reynolds is the featured player, he is a point gaurd (PG) who has an outside chance of making it into the NBA. I chose Michael Jordan's number 23 as the basketball card number for the Phungo Set. The card is bordered in dark blue to match Villanova's team colors.

The picture was taken during a game at Philadelphia's historic Palestra. The Palestra is the Home for Penn Quaker's basketball and several big five/city six contests between the six Philadelphia college basketball teams; Nova, Penn, Temple, St Joes, La Salle, Drexel. If you're a basketball fan and you have the opportunity to see a game at the Palestra it is truly worth the effort. It is one of the oldest basketball gyms in the world and has been the site of many a great game. The list of notables that have played games there include Dr J, Allen Iverson, Oscar Robertson, Bill Bradley, Rick Barry, Billy Packer, Patrick Ewing, David Robinson, Ralph Sampson, Jerry West, and of course Wilt Chamberlain.
Posted by deal at 8:54 PM

The Phils need your support!!!

More Hardball wants to know which city has the hottest fans in Major League Baseball. Last weekend the playoff began, and now it's time to determine who wins the pennant for each league. Let the games begin with the Phillies vs. Cubs and BoSox vs. Angels.