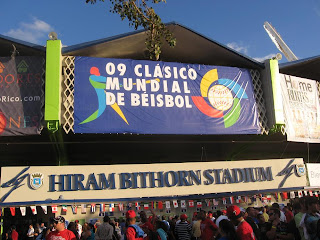 Random Observations team Phungo made during the World Baseball Classic in San Juan Puerto Rico.
Puerto Rico is sort of like being in an ethnic neighborhood in Philadelphia or New York. Lots of stuff is very different and some stuff is a lot the same, many folks speak a different language but if you need somebody who can speak English you can usually find them. They use the same currency and you don't need a passport.

The local delicacy is the Mofungo - Mashed Plantains which are then fried and topped with your choice of Meat, Fish or Vegetables. (I think there is a Mo Phungo joke in here somewhere) Plantains go with everything and are even used as a Pizza topping. 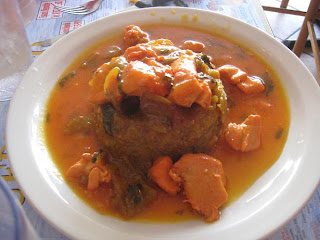 
Hiram Bithorn Stadium is a loud and rockous environment. Games are as much an event as they are games. The Crowd noise rivaled that of a Major League Playoff game.

Bithorn is a 20,000 seat stadium which I would equate to a large Minor league park. They have dizzy bat races and there are fireworks for the 7th inning stretch.

If you want free junk they got it. Some company was giving out 64 oz bottles of household cleaner - I have fears some drunken American may have confused it for gatorade.

Hiram Bithorn was the first Puerto Rican to play in the Major Leagues. Bithorn was a Right Handed Pitcher for the Cubs and White Sox for four seasons between 1942 and 1947. His career was interrupted for Military service in 1944 and 1945.

I saw the Netherlands play twice, once as the Home team and once as the Away team, yet they used the same dugout both times.

When they announce David Ortiz at Hiram Bithorn, they follow his name with "Big Papi"

The 375 sign in Bithorn's left field power alley was absolute death valley for hitters. I saw 4 or 5 balls caught in that very spot.

Free T-Shirts are just as popular in Puerto Rico as they are in America.

For one of the games 3 National Anthems were observed, none of which were the United States Anthem.

The lines in the Mens room were so long that a vendor came in to sell beer.

Concessions at Bithorn are run by Fuddruckers/Pizzeria Uno and include basically American food, but the Menu is in Spanish. The prices were more reasonable then an American stadium. $2 for a bottle of water and 2.50 for an order of fries. I think beers were $4 and they have Pina Coloda vendors.

You get fans of all types at the WBC, I met great folks from all over and even shared a cab with a Mets fan.

One local told me that Hiram Bithorn is not the nicest stadium in Puerto Rico. It is located in close proximity to the Airport and San Juan which makes it more convenient for big events like the WBC. He preferred a newer Stadium Named for Roberto Clemente that was further away from San Juan.

In the game in which the Dominican Republic was eliminated Big Papi played in the field, while Hanley Ramirez was DH. The Dominicans were so loaded at SS that Miguel Tejada played 3B and Jose Reyes started at short. Oh and Hanley is a pretty big man.

Randall Simon was clearly the on the field leader of the Netherlands Squad.

Walgreens in San Juan carry 75 card re-packs of baseball cards. they did not appear to have a regional flavour.

Mrs Conley would be very disappointed w/ me... I don't think I could recall much of my High School Spanish. Near as I can tell the only Spanish I know comes from mexican food menus, beisbol cards, and Madonna songs.

If you want to chase autographs or see ballplayers off of the field, the team hotels are in Isla Verde, which is supposed to be one of the nicest beaches in San Juan.

I am ashamed to admit that we attended the game where the Netherlands upset the Dominicans but did not stay to it's conclusion. 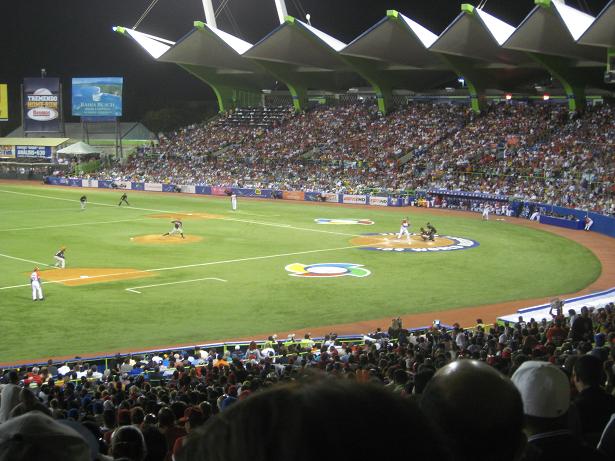 This is a far more crowded stadium for the Puerto Rico v Netherlands game. 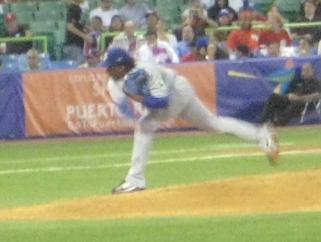 Team Phungo received great tips and helpful information from many baseball fans including: Angels Mark, Nats Lisa, Lebanon Valley Carl, and locals Rafael, Nestor y Magdalena - Thanks to all of them and I hope they had as good of a time in Puerto Rico as we did.

My wife was in the Walgreens in San Juan and she didn't get me any repack cards!!!!!!

I got a key chain.

Seriously, I have to do everything for myself when it comes to collecting.

Great report! I've never seen a game outside the US - I bet that would be an awesome experience.
Thanks for sharing.

JRJ - it was awesome, I had never seen a game outside the US either.

and as a bonus I get to combine two of my favorite things vacations and baseball.

Did u buy any of the repacks?

Moe, I couldn't bring myself to buy a repack, - they looked the same as the repacks you see in the states.