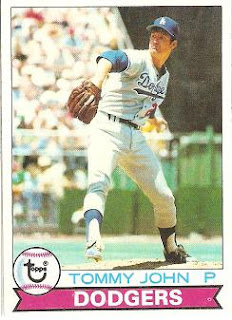 A few weeks back I ran a poll to see what my readers opinions were on Tommy John as a Hall of Famer. This was the 2nd Phungo HOF poll. In the first Jim Rice recieved a thumbs down. Once again the Phungo readers have spoken and Tommy John was also rejected, and by a larger margin. His 288 wins (294 including post season) were not enough to persuade Phungo readers of that John is Hall-worthy.

There were 4 "Yes" votes and 9 "No" votes for John. I had one other voting category not present for BBWAA writers, and that is to Defer a vote - one person chose this option. I based my Yes vote on a few things. 288 career wins, He pitched for 5 playoff teams in the pre-wild card era (note 1 NLDS in 1981 strike season), and in 3 World Series. He may have come up short in all 3 of those series but I think getting to them is also important. And lastly I believe that he deserves at least a minor bump for being the first athlete to successfully pitch after receiving the surgery that now bears his name.
This small Phungo vote (30.7% for) was remarkably close to the final Hall vote (31.7%). The Tommy John vote also generated less interest than the Rice vote (14 cumulative votes down from 26 for the Rice Vote). There were no reader comments regarding the Tommy John vote either.
If Phungo is still alive a year from now I will try and bring up the vote again. It will be interesting to see what happens to Tommy John in these limbo years between the writers ballot and the Veteran's ballot.

It hurts me to say this, but David Cone is not a Hall of Fame pitcher. He had some great playoff success and a fabulous season for the Mets in 1988. Overall, though, he just doesn't have the career numbers.