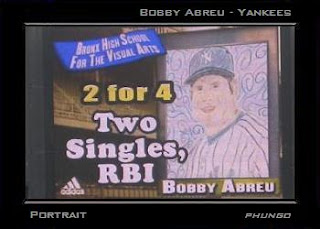 The Dodgers and Phillies are taking the day off today as their series moves to Philadelphia. This gives the staff here at Phungo Head Quarters a chance to catch our breaths and examine what is going on in the rest of the world - or at least elsewhere in Baseball.

Yes in New York, there is another League Championship Series happening. The junior circuit series features a match-up between the New York Yankees and the Nomadic Angels. Well the Angels are really not nomadic, they just have no idea what city/town/province/locale they hail. To make it easy on them perhaps we should refer to them as the Earth Angels.

This Bobby Abreu Phungo Card is a great way to rep this series. He is currently a member of the Earth Angels - see it's catching on - and he was also a Yankee.

This photo was taken during a Yankees game on May 3 2008. Late in the game the Fanvision displayed portraits of the batters done by students from an area art school. I have no idea who the artist was that drew this picture of Bobby Abreu was nor the medium - pencil or charcoal maybe?? - perhaps this information was displayed elsewhere on another scoreboard. Perhaps the Yankees video staff thought it more important to display the Adidas logo on the video board.

The Black Frames are the Phungo Card Inserts, and I looked for some oddball quirky shots for some of these. This is one of those oddballs.

Bobby Abreu has been recognized at Dinged Corners recently and there have been various debates over his Hall of Fame Potential. Bad Wax ran a column on Abreu as part of the Definitive Collection Series.

Abreu has always been a conundrum for me. I like what he brings to the table offensively. He hits well and has some pop, although much less than he did during his career peak with the Phillies. At age 35 he remains a good base stealer and is a plus on the base paths. And Offensively he knows how to work counts and draw walks. Among active players he is 7th all time in Bases on Balls. His .404 OBP ranks 8th. His .896 OPS ranks above Justin Morneau, Derek Jeter, and Carlos Beltran.

But Abreu just never seem to come through in the clutch, granted while I was watching him he played many years with some terrible Philadelphia teams, the opportunities were scarce, when they came up many a pitcher would give Abreu a free pass and take their chances with someone like Travis Lee.

In the field Bobby Abreu is basically adequate - he can cover some ground but does have that fear of the wall. He does have an above average arm and the Earth Angels consider him good enough to move the younger Vlad Guerrero to the DH Role.

Personally, I am hoping that Abreu sticks around a few more years and gets 3000 Hits. He was one of the players that I always looked forward to seeing. Yes, he was with the Phillies more marginal teams, and perhaps they needed to get rid of him to get over the playoff hump, but he was brought an awful lot to the table when he played here.
Posted by deal at 1:01 PM