Cincinnati Reds Blogger Chris of Nachos Grande is doing his part to get the economy moving. He has started a Cards for Clunkers stimulus package. Simply put he has a few choice cards, that are Clunkers in his collection, and he is moving them out via trade for any cards that you have on his more recent Want lists.

Chris had some great Phils Gold Parallels and I had some extra UD Masterpieces for trade. I sent out a couple of cards on Chris' Want List and a few other Reds cards, He was good enough to get me the Gold Cards, plus some Phils. 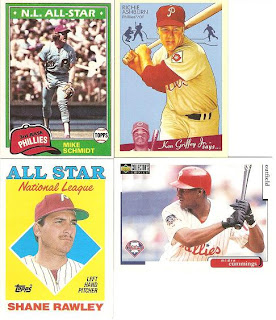 I am not sure how many Schmidt Cards I have from the Topps Base issued during his playing days. Probably 1/3 to half of them. This 1981 Topps is new to my collection and I am glad to have the card.

Another HOF card in the bounty was this sweet looking 08 Goudey Ashburn. Shane Rawley's only All-Star selection was for the 1986 game, in which he did not appear. This is a 1988 Topps card and the All-Star designation here is likely for the Topps team. Rawley was 2nd in the league with 17 victories during the 1987 season. Midre Cummings only played for the Phils during the 2nd half of the 1997 season, and I doubt there were many cards issued of him as a Phile. He ended up the Phils principle center fielder during their miserable 1997 campaign. 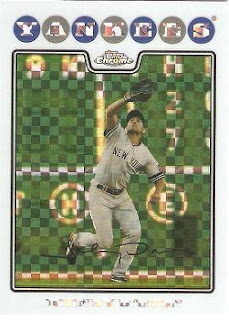 I have recently started a few player Collections, and Johnny Damon is one of the players I am collecting. The others are Garry Maddox, Jamie Moyer, Chase Utley, Bill Lee and Mike Mussina.

I really don't have many Johnny Damon Cards and figured having a shiny X-fractor would be a nice anchor for one of the Damon pages.

And a Special Thanks to Nachos Grande for including the Brad Lidge Sketch Card from the Gint-a-Cuffs Promotion.

I hope that Nachos Grande is as happy with their new cards as team Phungo is with these fine selections.

I always loved tha Schmidt card. You can tell he is pissed about something. An outfielder probably missed the cutoff man.