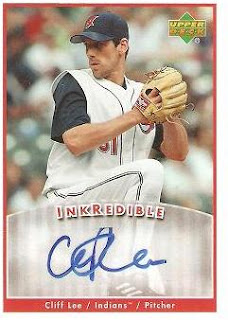 Congratulations to Paul over at Paul's Random Stuff for getting the first Sig of the Fall 2009 Tournament. Paul also picked Chase Utley for the bonus which was among the Players Team Phungo witnessed homer this season. PRS is off to a quick start with men on first and second - I will assume he is representing the Mets. The Utley Homer actually occurred against the Mets, in the first Phillies game I saw this year.

This auto may have been worthy of more than a double - 1) it's a little sloppy and 2) part of it glances up off the sticker - but I balanced that with 1) Lee is a Phillie, although he is an Indian on this card - I figure most folks that check in here start thinking Phils right off the bat. 2) This was more major - The night of the contest Lee was on the mound in the middle of a pretty good game.

The Cliff Lee Auto went for about $3.50 on ebay. It is a sticker auto, but the clear ones still look pretty decent. I picked this up prior to Lee coming over to the Phils, and at the time his autos were pretty reasonable for a guy coming off a Cy Young season. A more recent sale of this card went for $10.47. The low auction for a Cliff Lee certified card auto was $4.82 for the 05 Donruss Prime Patches card. My favorites among the cards others that have sold on Ebay recently are the 07 Goudey ($7.94) and 07 UD Masterpieces ($10.01) - both are On-Card autos. His high Auto-Card was $50.00 for a 2002 Donruss Classics #d card - I assume this is a RC-Auto.

Note: All prices above including shipping charges.

I don't think I need to go into much here. Cliff Lee came over to the Phils to be there ace as they had many pitchers drop off during the season and Cole Hamels fell short of expectations. Lee has been formidable in his first post-season and I hope that continues. As I mentioned above he is a Cy Young award winner and he has been quite a workhorse the past two seasons.

Several folks collected bonuses so we are off to a quick start.

Paul's Random Stuff - Representing the stinkin Mets: Men on First and Second
The Wax Ripper - Yankees: Man on First (picked Ryan Howard)
In Search of Pat the Bat - PHILLIES: Man on First (Raul Ibanez)
Night Owl - Dodgers: Man on First (Jayson Werth - who actually homered in just about every game I went to)
Nachos Grande - Reds: Man on First (Melvin Mora)
Autographed Cards - Royals: Man on First (Jayson Bay)
Indians Baseball Cards Always - Indians: On Deck - David went with a long shot in Josh Beckett who did homer off the Phils but not in the game I attended.

Thanks all for participating! The 2nd inning of Spot the Sig! will occur on Sunday Night, typically the Sigs go up around 9:30 PM. You can join the contest at anytime. We are off to a fast start with a lot of good competitors and I am sure everyone is looking forward to an exciting competition.

For more information on Spot the Sig! click here.
Posted by deal at 7:37 PM

Cool! Keep up the good work. BTW how the heck did someone get Melvin Mora right?

I could have sworn the L was an R, so I was only looking for guys with the initials C.R.

Paul O fan, I think NG may have recalled this post:

from back in September.

Not all of the STS entries will allude to past Phungo Entries, but occaisionally one will pop up.

Actually I am the one that took the Beckett longshot.

I could have swore that was the game you had said you were going to when I did the Q&A...