Five Below is a Philadelphia area chain of "upscale" dollar stores. As their name implies everything is $5 and under - actually most items are $5.30 including PA Sales Tax. They are good for stocking bricks of baseball cards in those clear plastic containers. The other things they have that may be of interest to a sports collector are baseball caps and other items of apparel with team logos.

On a recent visit I noticed they had several New York Yankess McFarlane figurines running for $5. I don't really know anything about these things but $5 seemed reasonable for the right customer.

They had Mariano Rivera, Andy Pettitte, and Johnny Damon. A quick scan for these figurines on ebay found completed sales as low as $7.95 for Pettitte. Others sold for as high as $17 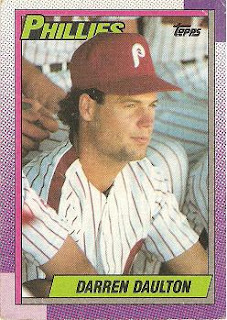 If you are into higher end memorabillia I found it disturbing to find out that Darren Daulton is following in the footsteps of Lenny Dykstra and is selling off his 1997 World Series Ring (acquired with the Marlins).

I have been prone to compulsive behavior myself but to any of us that would give up a limb just to be able to play professional sports at any level, the hocking of a World Series Ring at any price just sounds so ridiculous.
Finally, There is one other special item for the right customer with an extra 40 thousand to throw around. Last year Cole Hamels was named the World Series MVP and won a brand new custom Camaro. Apparently the car that GM delivered was not what Hamels had ordered. Hamels is giving the car to his wife, Reality TV starlet Heidi Hamels, as a Birthday Present. Heidi correctly cited that the car is a sports car and should definitely have a manual transimission, unfortunately the car GM built was an Automatic.

The erroneous Hamels car that GM had custom made was put up for sale locally and recently sold to a Philadelphia area buyer. For the Full details of the story click here.
Posted by deal at 7:55 PM

Sad to hear about Dutch selling his stuff. Apparently he was part of the Phillies pep rally this afternoon at Liberty Place.

A brilliant, spectacular, visually-entertaining compendium of information out here,never seen any jewellery blog like this. www.zoppinicharms.co.uk