Team Phungo is very happy to announce the third edition of Phungo Cards.

The honor of the #1 card for this years set goes to Roy Halladay, featured here pitching on the evening of his NLDS No-Hitter. 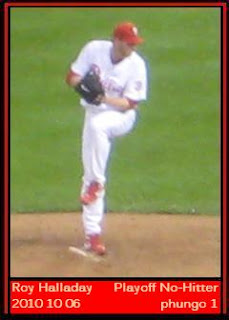 It was a crazy year at Phungo HeadQuarters.  We at a lot activities going on - producing the set probably just added to the chaos - but was usually an enjoyable and welcome diversion from all the issues that life throws at you.
I am basically happy with the set.  Despite the advanced age of the camera I am dealing with and mostly attending night games this year, I ended up with many good photos to draw from.  I experimented with using a Black Border for the base set this year - ultimately this proved to be a failure.  The cards came out much darker then I would have liked.  There is a serious drop off from the digital version to the photocards I got back from the winkflash.  That was my only disappointment, but it is significant blow.
I was happy with the 56 subjects that made the final cut.  The 2011 Phungo Set features 47 players and coaches from 21 teams.  There are 19 Phils cards in the set.  We were able to produce cards of both 2010 MVPs (Joey Votto and Josh Hamiilton) as well as NL Cy Young Award Winner Roy Halladay.  Team Phungo was on the road a few times this year and there is a fairly interesting variety of subjects from outside of Baseball.
Black Frame Insert Cards also return in 2011 - This years BFI set consists of 5 cards plus 2 very special DUAL BFI cards.
Team Phungo is also introducing a new Continuity Series Insert in 2011 - I will tease the new Insert set by mentioning that the inaugural installment features three Hall of Fame players.
Keep checking in at  Phungo over the next couple of weeks as there will be a heavy dose of 2011 Phungo Cards - let me know what you think whenever a card pops up of your favorite player or from your favorite team.
Happy New Year!!
Happy New Year to All  - and please take a moment to vote on the junk of the year semi-final - poll to the right -->
Posted by deal at 5:27 PM

Looking forward to the 2011 Phungo set!