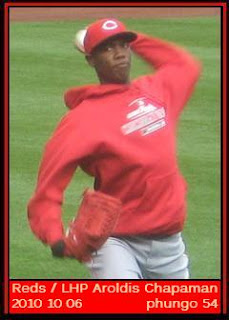 2011 Phungo #54 Aroldis Chapman
There are always a lot of Phils cards in the Phungo Set - They are my favorite team and my local team so I get to see a lot of their games.
Getting snapshots of out of town players is a bit trickier.
First off I get to maybe 15 games a year - while this is a fair amount, it likely means I will only get to see about a dozen of the 30 MLB teams.  I also have to know the players that I am taking pictures of, or else I may end up with a memory card full of batboy photos.
I sort of model the Phungo Checklist off of the 100 card sets that mix upcoming prospects with Veterans.  I have always been a fan of the two UD Masterpieces Releases and like the mix of Superstars, Prospects, HOFs and Non-Baseball Icons.  This approach also fits into a manageable set size for team phungo.
There are 21 Teams Represented in the 2011 Phungo Master Set.  I try to produce a card for each team, but inevitably teams get left out especially from the AL West who the Phils rarely see.  I also try and pick out cards that will interest the folks with whom I frequently trade, but there are always omissions.  Teams that got bypassed this year included the White Sox and Padres - sorry to both Steve and Rod, but I think I was able to create some  cards that will interest both of you.
The Reds were among the teams that I did get to see this year and it was a good thing.
Aroldis Chapman was one of the many big name rookies to debut in 2010 and I was extremely happy to get a nice photo of him prior to Game 1 of the NLDS.  This is one of my favorite cards in the 2011 Phungo Set, Unfortunately the final product didn't come out quite as good as this one.  There is always some degradation of the Photos when I sent them off to get printed, probably due to excessive MS-Paint work that goes into creating the cards - this year the fuzziness is worse than usual and the cards are really dark.
Anytime I can get an action shot (even just warming up as with Chapman above) I am happy.  The presence of the Baseball in the Photo along with capturing Chapman facing the camera make this card a winner in my book.

Note - I didn't notice the misspelling in Chapman's last name until I actually posted the card.  ugh.

I don't get to many games myself, but should you ever want to use one of my photos for your cards you may! I took some of Chapman last year when he was still in the minors: http://fanofreds.blogspot.com/search/label/Aroldis%20Chapman

I do the same thing that you do, and I am glad that I found someone else who has trouble making a proper set with their own pictures. You kind of have to just make as many cards as you can.