For 2011 We here at Team Phungo are proud to announce the premier of a brand new insert set that we are very excited about. 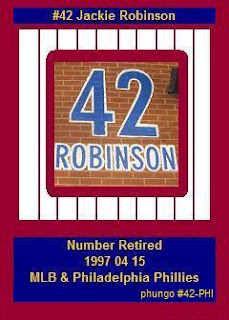 
The first card in the debut edition of the Phungo #42 Retired Number Series is dedicated to Jackie Robinson whose number was retired across baseball on April 15th 1997.

This is Robinson's Retired Number at the Phillies Home in Citizens Bank Park in Philadelphia.

The #42 Retired Number Series is a continuity series.  I envision adding cards to the series each year until I get tired of making Phungo Cards.  The inaugural issue consists of 3 cards.   Going forward I anticipate adding five cards to the set each year.

The cards will eventually feature as many stadiums as I can attend.  Jackie Robinson's number is retired by all 30 Major League Clubs, therefore it is likely we could feature a Robinson card for the insert set every year for some time.

In honor of Jackie Robinson all cards in the series will start with the prefix #42 followed by the card number which will reflect the team/ballpark and the players Number.
Posted by deal at 8:42 PM

Cool idea. Why hasn't this been done before? How come Topps keeps making cards of cup stacking champions or skateboarders or whatever the hell, but we never see cards celebrating retired numbers and the players that wore them? I'm going to petition the MLBPA for a Phungo card license tomorrow.