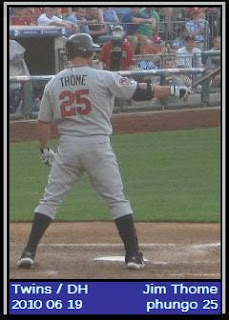 Here is Jim Thome and his trademark pre-swing stance.  Thome does this prior to every pitch and I have seen him to it many times in many different uniforms - Indians, Phillies, White Sox, and the Twins.

This photo was taken on the 19th of June when Thome came to pinch hit with a couple of runners on.  At the time I really didn't mind - I was sitting in the best seats I ever had at the Phils new ballpark, and the Phils were enjoying a comfortable five run lead in the 9th inning.

Then Thome hit one of his most majestic Home Runs.  The shot cleared dead center by a good 30 feet.  Later in the inning Joe Mauer would hit a 2 run dinger to tie the game.  In the end it wasn't the Phils day as they lost 13-10 on a very sultry day.

It was a tough loss but we were enjoying a Saturday with good friends and some adult beverages so it wasn't all bad - plus I got a couple of nice shots for the Phungo collection.
Posted by deal at 9:25 PM