I tend to work on the Phungo set sporadically throughout the year.  I sort of have an idea of what the card design will look like early in the year, but the subjects don't really fall together till close to press time.  In some cases I know that the players will be on different teams by the time of my targeted January Release.  But these cards are typically too good to pass up.
This is the case with Jayson Werth 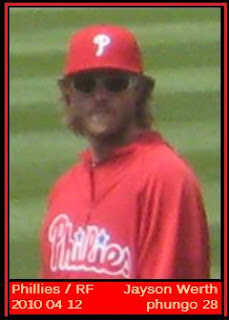 2011 Phungo #28 Jayson Werth
I really liked Werth's early season stoner-caveman look.  The clean shaven Jayson Werth that showed up at the Nats press conference last month looks like a little kid.
Despite is long slumps and occasional baserunning lapses, I have always been a fan of Jayson Werth.  Players that are found cheaply on the Major League scrap heap who become stars are easy to like.  He was also a favorite of the Future Mrs Phungo and has always been subject of much banter in the Phungo household - My jealous quips are often along the lines of "I'm telling you there is no way Jayson Werth can make better French Toast than I do"
Posted by deal at 8:11 PM

That's nothing. I've seen a shirt with his number on the back and on the front it says "He's Werth it"

he definitely has his female fans.