I always think that Junk of the Month is more interesting then Pull of the Month, So I am going to start with that: 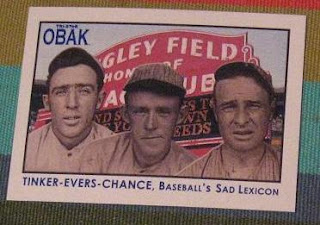 First off - I am having a PC issue at home so pardon the Pix instead of Scans approach.

I actually am very happy with what I have seen from 2010 Obak.  I was a bit disappointed with the physical aspects (cereal box card  quality) of the cards, but I did like the look and the checklist of the cards.  Much better than either edition of Topps 206.

But this card made me shudder - He we have the subjects of a 1910 poem juxtaposed with the Wrigley Field Marquee - Lights added 1982.

Pull of the Month 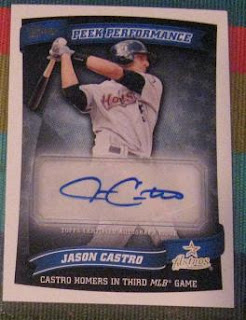 
Jason Castro was named the Astros #1 Prospect by Baseball America in 2010.  His debut was unremarkable, but I will be keeping an eye on him.  This card was pulled from a retail pack at my local Wawa a block from my house - Retail Mojo! 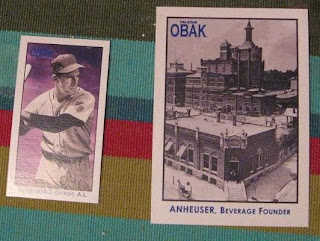 As I mentioned above I am a fan of Obak - here's your proof.  I am still on a mini kick and a Mini of any Hall of Famer is a Win.  Ok, I am not a Bud fan, but if it is the only beer that they are selling at a game, I am not afraid to admit I will overpay for it.  A Hall of Fame mini and a Beer related Trading Card are your Runners Up for January 2011 Pull of the Month.
Posted by deal at 9:55 PM

Here's what's even sadder about the Tinker-Evers-Chance card: those guys never played a game together at Wrigley Field...the Cubs of their era played at West Side Park.