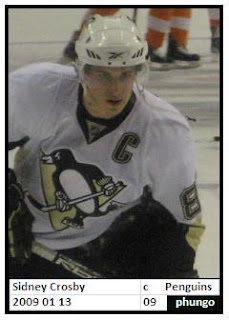 I am mostly over yesterday's game. Hockey is Canada's game and Canada is the 2010 Winter Olympics Host Country - and for those reasons it was good to see the Canadian team win.

I think it is time that we stop looking at USA Hockey as perennial underdogs. The Canadian and American squads were the only teams to be entirely made up of NHL players. I don't know a lot about hockey but while other countries may have professional leagues, I am not sure that they quite measure up to the caliber of hockey played in the NHL.

Going forward I would think that in the 2014 Solchi Olympics that team USA should come in as one of the favorites in Hockey, along with Canada and the host country, Russia. The Russian Federation perhaps had the most disappointing showing in the 2010 Olympiad and I would .

As with the past year, we have included some non-baseball subjects in the 2010 Phungo Set. I believe this is the first Phungo Hockey Card. I took this photo prior to a Pens Flyers game last January. If you ever get to the chance to go to a Hockey game, definitely try and check out the pre-game skate. It is the Hockey equivalent to Baseball BP. In Philadelphia they let you go down to the rows just off the ice. Just try and stand behind the net and not flinch as the pucks fly against the glass.

I have given Crosby card number '09' to mark the Penguins 2009 NHL Stanley Cup Championship. His position is 'c' for center and I suppose Captain also.

Congratulations to Team Canada and looking forward to 2014. USA! USA!
Posted by deal at 11:47 AM

Great game, man! Too bad I missed it.