The dilemma is what should I do with my pull of the month? 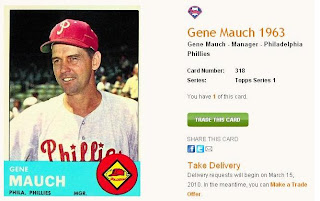 It is one of the best cards I could of asked for - It is a Philllies Card. It is aVintage Card. and it is on Phils 1963 Topps Want List - Check, Check, Check.

Unfortunately somebody posted that the shipping is $2.92 per card + 53 cents for each additional card.

As much as I love this card - $3 to Topps is over the limit for me. Mauch is considered a great tactical manager, but he never reached the World Series - He was the Phils skipper who helmed the team during their historic 1964 collapse.

And his cards are basically commons. A quick study found that a 63 Topps Mauch card did recently sell for over $6 shipped on ebay - it was in EX-MT condition though. There were also over 50 commons that sold for under $2 shipped. I consider Mauch a common and can't see the 3 bucks.

For those of you that keep track of such things - my pull of the month came from a Mantle Card: 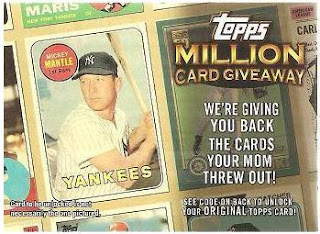 I could of just randomly selected almost any card that I got in my two rack packs of 2010 UD. And honestly the lamest card was probably the one of Target Field featured in my previous post - although I have started to see some better looking stadium cards from this set recently.

Instead I decided on this triumvirate of rather unflattering photos. I know Carlos Lee is a big man, and ditto for Kung Fu Panda - never thought of Marlon Byrd that way. But I think all three of these photos make these guys look a little chunky.

For a look back at January's Phungo Pull of the Month click here.
Posted by deal at 9:47 PM

I say take the plunge and pay the $3. I agree it's too much for "shipping" . . . Years from now you'll forget about the shipping charge but you'll still have a cool '63 Gene Mauch card in your collection.

You could always trade it to me...then I'll have it shipped with mine (for .53) and mail it to you when I get mine.

PatP that sounds like a great idea. I will send you an email.

I think that would be a good idea for all card bloggers to pull all their cards they want into one mailing.