The Original 1961 Topps - The Inserts

There are many inserts in 1961 Topps. Today we will take a look at some of these "subsets". 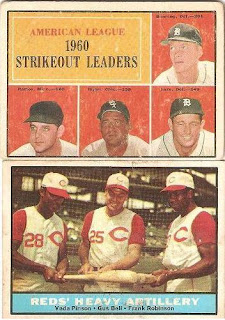 In 1961 Topps produced it's first League Leader Cards. Like this card featuring Jim Bunning and Early Wynn, several of the 1961 Leader cards feature Hall of Famers. If you would like to pick up vintage cards of Hall of Famers and your on a budget, you may want to look into league leader cards.

Multi-Player card returned again in 1961, This Reds Card with HOF Frank Robinson was among them. I don't believe the Phils have a multi-player card in the 61 set. 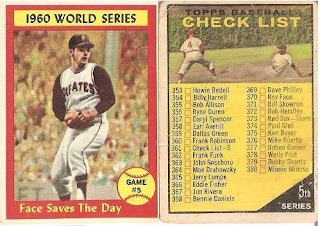 The World Series cards which debuted in 1960 return for 1961. One of these World Series Cards features Bill Mazeroski's historic Homer that defeated the Yankees in the 1960 Series.

1961 is the debut of checklist cards in the Topps Set. I like the cool pictures on the top of these checklists. I am pretty sure that these are photos rather than painting and may be the first time in action pictures were featured on a Topps card other than World Series games.

For a previous look back the Phungo 1961 Topps feature on Phillies Cards click here.