My first 2010 Heritage pack was a Retail Pack from Wal-Mart, where the packs go for $3.16 including PA Sales Tax. The pack proved to be a bit insert heavy.

Nice first couple of cards. Hats off to Ohlendorf for being the First Heritage card of 2010. Wonder if he has ever been first at anything else before. Ankiel is now with the Royals - not sure if he kept the -stache. Washburn remains a free agent, but still gets a Heritage card from the 2 months he spent with the Tigers in 2009. 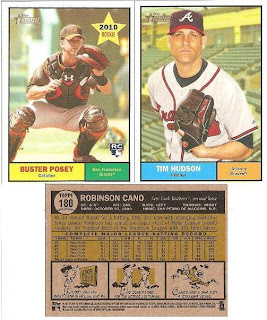 I like the second half of the pack much better. Three pretty decent young players. I chose Cano for the B-Side Rep basically because he is a stinkin Yankee. Buster Posey only needs a rookie cup to have three different rookie designations thrown on his card. 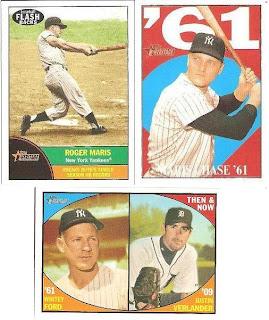 I like the Baseball Flashback card. Nice action shot of a player that has basically been denied his place in history twice.

Can somebody explain the Maris Chase cards going for bonkers bucks on ebay?? several #13 cards that appear similar to this one have gone for $7 plus shipping. According to the packs they fall one every four packs. They cannot be that uncommon.

I am pretty sure the Then and Now came out of a different pack. If someone can explain to me why Mr Verlander has been married to Mr Ford on this card, It would be appreciated. According to the leader board on the flip side of the card Ford finished 3rd in the league in Ks while Vernlander led the league - no symmetry there. It's not like the Tigers didn't exist in 1961. How about Jim Bunning he was a Tiger and was among the strikeout leaders in 61. 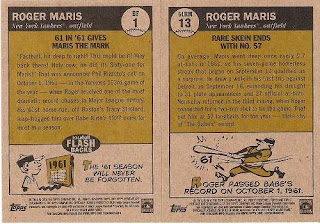 The B-sides of the two Maris cards for anybody that's interested.

Not a bad start to the year. I have already decided I am collecting only the Phils, plus one player from each other team from the base set. Undecided on the inserts.

I can send you Blanton, Happ, Halladay, and World Series Card #306 Lee Dominates Game #1. Let me know if you're interested.

definitely sounds like a trade. I will start rounding up some rangers.