Swag from Bill and Ben

I Wanted to put together a quick post to acknowledge a couple of recent trades.

I am going to lead-off with some a massive contribution that Ben Henry of The Baseball Card Blog made to the Phungo 1959 Topps Set. Ben is going through some serious downsizing and focusing of his collection - I sent some vintage cards Ben's way including the the classic 1971 Topps #5 Thurman Munson card and he sent me back almost 40 cards for the aforementioned 1959 Set.

The 59s included a couple of Phillies, which are hard to find (at reasonable prices) locally and a rare High Number card of Lee Tate as well as 36 other cards that I needed.

This is likely the biggest contribution I have had to the Phungo 1959 Topps Project since I started back in late 2007. If you want to see my 1959 want list as it stands currently or are just so bored you want to check my progress click here. As it stands thanks to Ben I have moved into the final 100 cards of the set, and am well ahead of where I expected to be at this point in 2010 for the project.

I also made a second trade of vintage cards and other with reader Bill F from Alexandria VA recently. I sent some Padres and a couple 1956 cards his way for a bunch of 1971 Phils and some newer "retro" Phils cards. Bill was also good enough to contribute to the 1959 cause with a Buyback of Claude Osteen. 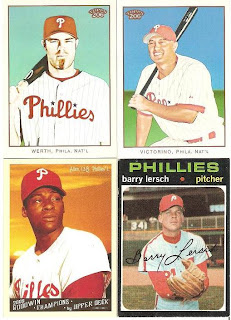 Loved all these card. I hadn't botthered to pick up any cards from the new T206 or the Goodwin Champs sets. ok maybe I did get T206. Yeah that's right I did get a single pack I think, but it yielded no Phils.

The colors on the Dick Allen make for a pretty sharp looking card. This is a set I probably should of given more of a shot in 2009.

The Barry Lersch card is from the High Numbered Series of 1971 Topps - you can follow Phungo quest for the 1971 Topps Phillies Team Set here.
Posted by deal at 11:33 AM

Glad I could help!