I am sure you are aware of this product. I picked up a single pack at Target, 7 Cards $1.05 including PA Sales Tax I am guessing. 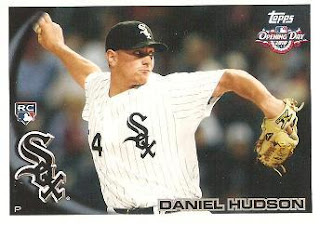 Daniel Hudson. I actually like this card and drew it in the half dozen or so retail packs of regular Topps I picked up a few weeks back. It is probably the only rookie card that I don't mind the RC logo on. Unfortunately the additional opening day pushes the red white and blue from a nice small touch to two dueling logos. 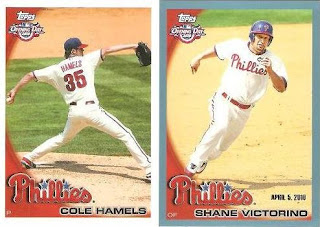 Unlike those half dozen packs of 2010 flagship Topps which yielded only one Phils card, this pack produced 2 including a serial numbered Shane Victorino insert. The light blue does nothing for me. Well certainly not as much as the Red did back in 2008 - which bordered the Phils cards perfectly. 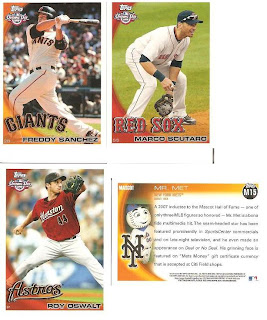 Other than stinkin Mr Met, A nice selection of cards. The Oswalt is a particularly good looking shot - Swoosh meshes into the card well - only draw back is Miller Lite ad in the background.
Posted by deal at 3:53 PM

I know a little girl over at Dinged Corners that would go coo-coo for Mr. Met. :-)