On a recent trip to Target I found a bargain blaster of 2009 UD Goodwin Champions. The blaster was half price ($10.59 w/ tax). I hadn't opened many if any packs of Goodwin last year so I figured I'd give it a shot.

This blaster contains 12 packs of 4 cards each. The Base Set consists 150 cards followed by 40 short prints and then 20 super short prints - and then another set of mini-exclusive cards - I don't know you figure that one out. There are a number of parallels including a set of minis that fall about 1/pack.

The Goodwin set was probably developed to compete w/ Topps Allen & Ginter - and it shows. Lets take a look - 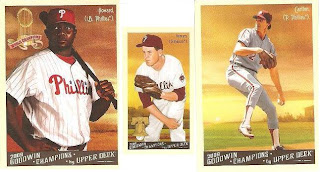 Howard - Roberts - Lefty - Nice Selection there - 2 World Champions. 2 Hall of Famers. Good Lookin Cards. All of the Current Phils cards have the World Series Banner which is a nice touch. Some of the cards have a "special" team logo - note the Liberty Bell on the Robin Roberts mini. 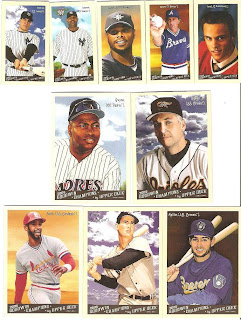 The Niekro photo is a familiar shot that we have seen in UDs other retro product, Goudey - That image was already borrowed from Fleer I think. UD was already mailing it in a year ago.

Griffey is card #1, which is only fitting as he returned to Seattle - the team for which Griffey was on the original UD #1 card back in 1989. As it turned out Goodwin Champions was one of UDs last Baseball products.
One More Mini 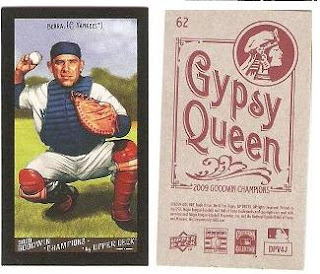 A Nice Black Bordered Mini of Yogi Berra. I am assuming that the special back minis have the black borders. This is a pretty sharp looking card of an Iconic player. 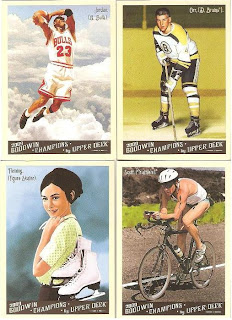 Like Allen & Ginter GWChamps contains other Notables who were not blessed with the abilities to play the great game of baseball.

Dave Scott is the original Triathlete or something like that - this card is a Short Print, the picture is different then all the rest of the cards. The cards all have a criss-cross pattern to their Backgrounds. For whatever reason the Scott card is all the painting - or photoshop of the painting anyway. Peggy Fleming looks really evil in this picture.

I decided to show off the base cards by constructing an All-Star team from the blaster. 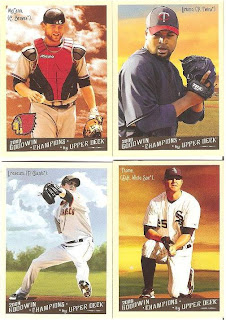 Two of these guys are already in the playoffs, and the other two could also get in. Notice that the McCann card is one of the ones carrying a special logo. I stuck Thome in with the Pitchers and Catchers because it was where I had space to put a DH. 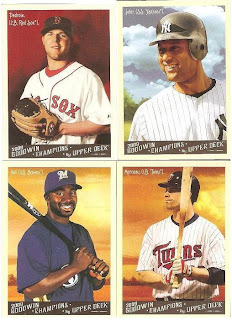 Ok Bill Hall is not an All-Star, but he is a short print so he got the nod as the Blaster 3rd baseman. Both Morneau and Pedroia have won MVP awards, Jeter has not. 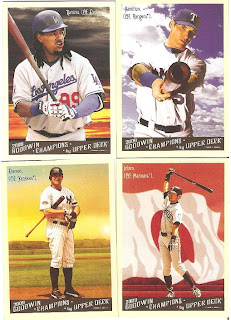 The Manny Card is pretty cool looking - You can see the storm clouds coming in on the edge of ending his Sunny LA Days. The Ichiro card is also a winner. I am pretty sure that the Hamilton card is straight out of Goudey. 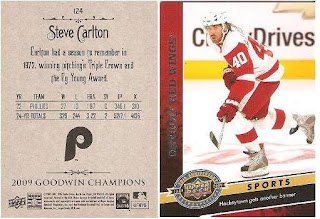 Card back of Steve Carlton - one issue with GWChamps is the font on the back. It is plain goofy looking. the lower case T's are particularly odd. I do like that UD did go to the trouble of creating a back for these cards. Every other UD product has identical backs - this reduces the personality of a set. The Phils logo here is from the 70s era Phils teams for which Carlton played.

I paired the B-Side here with a 20th anniversary card - if you pick up an UD blaster from 2009 you are bound to find a few of these. This card the Red Wings winning the 2007-08 Stanley Cup. The photo'd player is Henrik Zetterberg I think. 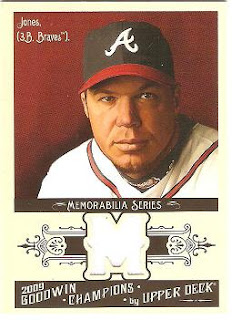 Chipper Relic- mojo. Not sure what the M stands for my guess is Memorabilia or Mojo.

Overall I enjoyed the blaster. The half price is key. 4 card packs always seem weak to me. but opening 12 of them with a good mix of oddballs and minis added to the fun. Unfortunately the box was marred by the fact that maybe half of the cards had a dinged upper left corner. Regardless it was still fun to open.

I doubt I will go to the trouble of building the set. I will more likely keep about half for various collecting projects - Phils collection, Hall of Famers, Player Collections (Thome n Damon), minis, My WBC collection (Ichiro), and My Plebes Collection.
Posted by deal at 9:55 PM