I couldn't get the Phillies in the T206 Case break over at A Cardboard Problem, so I took the Twins - They always have good young talent and plus guys Like Morneau Mauer and Liriano.
This is may be the first break I participated in this year and the first one I have ever watched live through the magic of UStream. Unfortunately one of the aspects of the break we were looking forward to was cashing in on a Strasburgmania - of course as luck would have it Strasburg would have Tommy John Surgery basically the day of the case break.

Still it was fun to watch the break as Marie performed the marathon of opening 140+ packs.

I think they could have come up with a nicer way to stamp the Cycle cards. The numbers run right over the bottom of the first C. It is as if serial numbering the cards was an afterthought.

There were actually 2 Slowey Relics in the break. The one that has the b-side displayed here also has a stripe on it, but it is a bit crooked.

I have no idea what building Morneau is supposed to be looks like an older dorm at southern school. The Mauer card is a checklist, I also picked up a Mauer Base card in the break.

I am on a bit of a mini kick right now and enjoyed these. I am particularly fond of Polar Bear minis and will likely turn collecting those into some sort of obsession at some point.

There were a bunch of non-Twins base cards that I got including one Phils card. 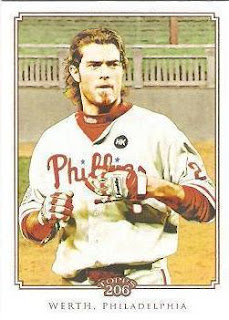 #285 Jayson Werth
Bit of a fan favorite - especially among the ladies - this is likely one of the last cards that will be issues of Werth in a Phils uniform. Jayson will be a free agent after the season and is likely to head elsewhere for big bucks.


Thanks again to Marie over at A Cardboard Problem for running the break.