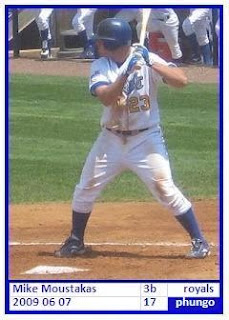 You may not know who Mike Moustakas is right now, but I think you may a year from now.

Moustakas is a Third Base prospect in the Royals system. Earlier this week he had an impressive game for Kansas City's Omaha Franchise. He connected for four hits that night including 3 homers and an incredible 11 RBIs. That's more runs then the Phils have scored in a couple series this year. Click here for the MiLB story on the game.

The picture from the Phungo card above was taken at a Wilmington Blue Rocks game last year. This is the Phungo Game Report from that day that also featured Pirates prospect Pedro Alvarez.
Posted by deal at 7:55 PM

I'm glad to have this card and I hope Moose gets a call after the AAA season is over.