Even before I got to looking around at cards I met Greg from In Search of Pat the Bat. He was good enough to give me this fine 57 year old Al Glossop Photo Card. 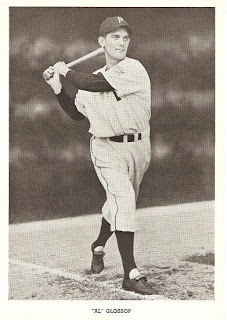 Al Glossop was a journeyman infielder spent 1 season of his 5 year career with the Phils. There were not many baseball cards issued during the 1940s, so I always enjoy adding something from that era to the Phungo Collection.

According to the Standard Catalog of Baseball Cards there are 40 known Photos from the 1943 Photo pack. Other players from the set Include Chuck Klein and Lloyd Waner.

I also heard a rumor that In Search of Pat the Bat may be back up and running in the near future. 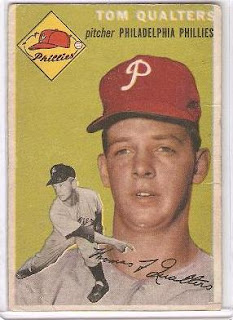 One of my favorite dime box dealers was featuring vintage for the first time. Most of the stuff I see at shows is going for a lot more than what I can find in on-line sales and I end up just window shopping those tables. The rest of the 54s were priced at around $5 I think, but this one was a little off in condition and marked as a buck. That's Phungo Quality. The Phils dimers included a Mike Schmidt Coca-Cola variation. I didn't realize that some of the Opening day cards had different photos on them until I cam across this Raul Ibanez card. The B-side is the OPC version of the 1978 Bake McBride card.

This is an interesting set which I am slowly collecting. Brian from 30-Year old Cardboard chronicled his experience building this set earlier this year. 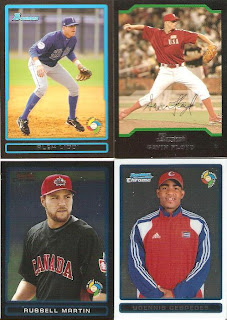 I have been putting whatever WBC cards I find into a binder, not sure what I am going to do with them. I am one of the few collectors that has any interest in the event so the cards are usually easy to find and in low-demand. The Gavin Floyd card isn't really a WBC card, but I have grouped any card featuring the Players country in my WBC binder. 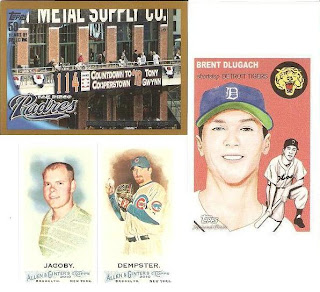 I really like the Franchise History cards and expect to collect all of them eventually - I already had the base version of the Padres card, but couldn't resist the Gold version for a dime.

The Brent Dlugach card is from the 2010 National Chicle Rookie Renditions subset. This set consists of 20 rookies on (mostly) Classic Topps designs that are painted.

Right now I pick up almost any Mini I see in a dime box. The Dempster card is an A&G back.
Posted by deal at 9:55 PM

I have 2010 Topps Gold team cards of the Pirates, Cubs and Twins if you're interested

CalJr3000, I am definitely interested. unfortunately I have some stuff to clean up and organize before I resume trading. Will try and get back to you whenever I get everything a little more settled.