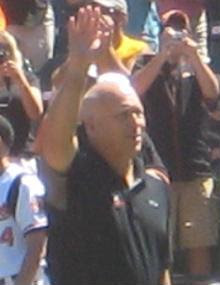 For the second day in a row Team Phungo got to go to the ballpark and see a team hit four home runs and lose. Yes on a beautiful day at Camden Yards, the Tampa Bay Rays provided lots of pop, but that was not enough to contain the persistent line up that led the Orioles to an 8-7 victory.

The pitching match-up featured a pair of prospects that each organization is hoping become part of their rotations of the future as the Orioles 22 year old Chris Tillman squared off against Wade Davis (age 24). Neither pitcher dominated, although Tillman pitched well only giving up 1 run through 5 before giving up a 2 run shot to Evan Longoria in the 6th.

The 6th inning was pivotal as the Rays took a 5-4 lead on another 2 run homer - this time by BJ Upton. The Orioles hitters then showed their resilience by battling back to score four runs of their own in the bottom of the inning. The damage was done by three consecutive singles with men in scoring position and a sacrifice fly. The O's Bullpen will give up 2 more runs but hold on for the win.

Prior to the game the Orioles honored the 15th anniversary of Cal Ripken Jr passing Lou Gehrig in number of consecutive games played. Cal returned to the yard to throw out the first pitch - photo above. Cal is not sporting faux-hawk - that is the white hat of a fan in the stands.

BJ Upton got to test his arm several times yesterday as he attempted to throw runners out at the plate three different times. Unfortunately for him, none of the chances were successful. The day had a couple of just missed plays on D including Orioles CF Corey Patterson just missing in his attempt to pull back Longoria's homer in the 5th. 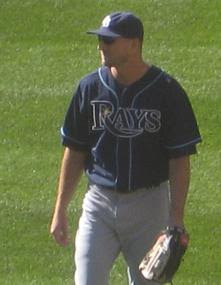 Fan Favorite Rocco Baldelli had a triumphant return to the Rays as he tagged O's Reliever Mike Gonzalez for a 2 run homer. It was Baldelli's first game as a Ray since the 2008 World Series - Team Phungo was in the house for Rocco's last previous AB for Tampa when he also homered.

I also wanted to mention that we got to see a fan make arguably the best catch I have ever seen at a game. The young man was probably in his late teens, and he had to jump slightly reach over his head and backwards to make a two-handed grab of a line drive down the RF line. Unfortunately I haven't seen any highlights of the catch. Congrats to the young man regardless.

Tillman was the 49th overall selection in the 2006 draft. His Start on Saturday was the 19th of his MLB career.

Wade Davis v Brian Roberts (click to enlarge)
Another one of my super-wide pitcher v batter shots. I think this is Roberts first AB in the game. The crowd filled in from base to base in the lower level as the O's drew 28K+ for the game. 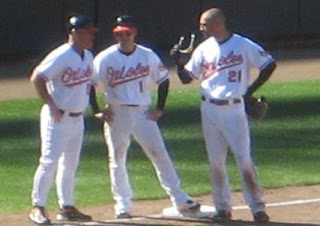 Check it out two base runners on one base. This is actually during a pitching change - The O's 3rd base coach is Gary Allenson.

Yesterday was the most recent Game Report featuring the Brewers and Phillies.

The Last O's Game Report was a few backs when they hosted the Rangers and lit up former Phil Cliff Lee.

This is the first Phungo Game Report on the Rays, although I do have one of my favorite postings from the last time I saw them play.