This edition of the Philly Show for me was a pretty good one. I had a totally free day, I was only marginally exhausted - I think for the rest of my life I will always be at least a little bit tired. I had a couple of want lists and actually knocked some things off them.

One of the highlights was the 1951 Topps Seminick in the previous post here are some others. 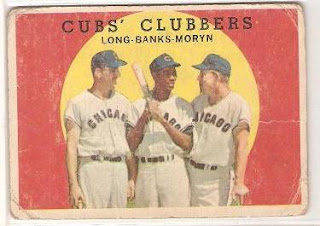 I was able to knock out four cards from my 1959 Topps Collection. I am down to my last 42 cards, and any time you can find four in one day at this stage of the game, you have accomplished something. This card which features Hall of Famer Ernie Banks went for the rather nice price of $2 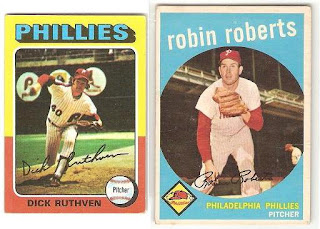 I already had the Robin Roberts card, but I could not let him set in the $2 bin. I seem to pick up at least one or two 1975 minis at each Philly show. This time it was Dick Ruthven. Typically I only go 25 cents on these, but for Ruthven I went to 50 cents. 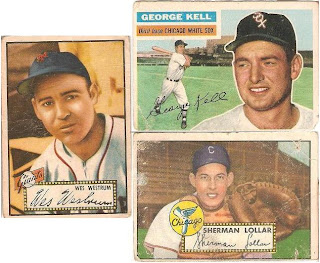 If you want to start building a vintage collection on the cheap, you may want to look into some Wes Westrum cards. I seem to keep coming across him in budget bins. George Kell is a Hall of Famer that you may not know about - he was a 10 time all-star who played 3b with five different clubs including the Detroit Tigers and Philadelphia A's.

All three of these cards went for $2. There is some creasing and the Lollar card has some surface issues, but the price was right. Good Rules of thumb 1950s HOF player for $2 - thats a buy. 1952 Topps fro $2 also a Buy. 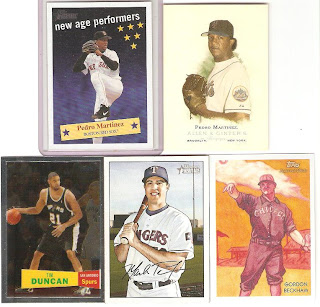 These Retro cards all came out of a Dime box. Pretty much anytime I see a Heritage insert in a Dime box, it goes in the Phungo Collection. Same thing goes for the 2006 Allen & Ginter's. The Tim Duncan is from the 2007+ Topps Hoop set that I have bee slowly building. 2007 BowHer Tex is also a set builder - almost over the 50/50 mark on that set. I just think the Beckham card looks cool. hmm how bout that good day for Chisox Cards I guess.
Posted by deal at 9:15 PM