Yesterday we published the 2011 Phungo card of Ivan Rodriguez.  Today we have his 2010 card. 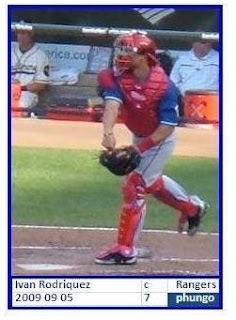 This is more of an action shot which was taken in Baltimore.   This is not actually a live game action shot.  Had Pudge been tossing out a runner at 2nd, I am sure his catchers mask would be rotated around toward the near side of Rodriguez's head.  Here he is throwing down to 2nd following the pitchers warm up tosses preceding an inning.

For me Ivan Rodriguez is a First Ballot Hall of Famer, Let's look at the Numbers.

Those are great numbers at any position, but at Catcher they are quite impressive.

Phungo Games
By my count, I was able to catch I-Rod in 7 games including the 1996 All-Star game.  Rodriguez's teams  came out on the winning side on 3 of those 7 games.  Rodriguez Hit well in those games 9 for 27 with a pair of Home Runs.

Farewell and best of luck to Ivan Rodriguez - I am glad that I was able to see parts of his great career.