The Phillies return home this weekend for a 4 game set with the Chicago Cubs.  Today we talk with Wrigley Wax who fills us in on both the Cubs and the classic Chicago Dog. 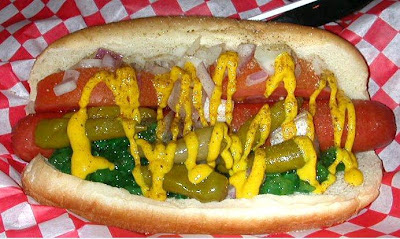 See Below for an explanation


1) The Cubs 2012 season is off to a rough start.  What would you like to see happen this year to consider this campaign a success?


I want to see the culture change that Theo keeps talking about.  I want to see smart, heads up play and lots of hustle.  I know there's going to be a bunch of losses this year, but if I at least see a change in attitude, that will make the losses more bearable.  I'd also like to see Starlin Castro's defense catch up to his offense.  But the ultimate success of the season would be if Theo can find a team to take Alfonso Soriano off our hands.

2) In the three years that you have been publishing Complete Set Prices, have you seen a set that has consistently risen or declined in sale price?

It's strange, but there's no consistency with the price of any of the sets.  They all seem to fluctuate pretty wildly. I've attached a chart (below) for each of the four decades I cover.  They all look like some crazy mountain range, going up and down. 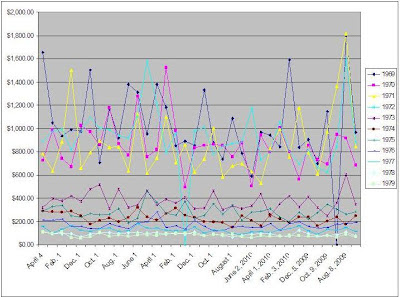 3) Last week the Red Sox did a nice job celebrating Fenway 100.  What would you like to see as part of Wrigley 100?

I really liked the way the Red Sox brought back all the living former players for a celebration...I'd like to see the Cubs do something similar.  The Red Sox celebration was when their biggest rival, the Yankees were in town....and then the Yankees put a damper on things by winning.  I hope the Cubs can have a patsy in town when they celebrate.  Unfortunately, right now the Cubs are the patsy everyone else wants to schedule.  The big question for me is when do you celebrate Wrigley 100...in 2014 when the park turns 100, or in 2016, celebrating the Cubs 100 seasons at Wrigley.  When ever they decide to celebrate, the ultimate would be to raise a World Series championship flag at the same time (I can dream, can't I?).


4) Who would be the Cubs starting pitcher on their alll 2000s team.

If you go by one season, it would have to be Mark Prior, who absolutely dominated during the 2003 season.  If you want someone who covers the decade, it would be Carlos Zambrano.  He was the decade leader in wins, games started, innings pitched, strikeouts, and psychotic episodes.

5) Which is the bigger culinary contribution Chicago Style Pizza or the Chicago Hot Dog?

For me, its the Chicago Dog.  The pizza has so many different variations, but there's only one Chicago Dog....Vienna Beef Wiener on a poppy seed bun, mustard, neon green relish, onions, tomatos, dill pickle slice, celery salt, and sport peppers (though I usually skip the peppers) and NO KETCHUP.    MMMMMMMMMM!!

Scorecard
Great to see Mark Prior's name in print here - also I would like to mention Alfonso Soriano has to rank with the best signings that the Phillies DID NOT make.  I would probably pick Pizza over the Chicago Dog, but I can certnaly enjoy both.  5 out of 5 for Wrigley Wax.
Looking Back.
2012 Phungo 5 Postings
Philadelphia Phillies - The Phillies Room.

Thanks for inviting me to the party!

As another Cub fan I echo all of Wrigley Wax's statements. Especially the Chicago Dog over the pizza.