Phungo 5 with Play at the Plate

Our last Spring Training Phungo 5 features the Play at the Plate discussing the Reigning AL Champion Texas Rangers.
1) How does one recover from seeing their favorite team be within a pitch of winning the Series twice and coming up short in back to back series?
After the 2010 WS, I was just pumped that the Rangers had made it.  I fully expected them to beat the Giants, but I was still happy to have been able to take my son to our first World Series game (Game 4).  Experiencing the loss last year was heart wrenching.  Needing one more strike twice and seeing it slip away made me sick.  It put me in a funk that took a couple of weeks to get over.
2) More interesting story Neftali Feliz moving to starter or Yu Darvish joining the rotation?
More interesting?  Yu Darvish.  More nerve wracking?  Neftali.  I’m excited to see how Darvish adapts to MLB.  He’s big and has the stuff to be something really special.  I also know he could prove to be very average, which would be a bust with the financial investment the Rangers have made in him.  The Rangers moved CJ Wilson from the closer role to a starter with good results, but I wonder about taking Feliz, who has been a pretty good closer, and making him a starter.  It’s not like the Rangers have a shortage of starters.  They could run out a 7 man rotation if they wanted to, but they like having the depth and I can’t argue with the success they’ve had with Nolan Ryan in charge and Mike Maddux running the pitching staff.
3) What Catcher deserves a good play at the plate card that has never reallly had one.
My favorite catchers are Ivan Rodriguez, Joe Mauer, Carlton Fisk (his 1977 Topps card is a beauty) and Johnny Bench.  They’ve all had patp cards that I’ve managed to get.  The most iconic patp card I can think of is the ’71 Thurman Munson, which I still need.  As a Ranger fan, I guess the one player I’d most like to see on a patp card would be Jim Sundberg.  He was one of the guys I pretended to be when I was a kid. 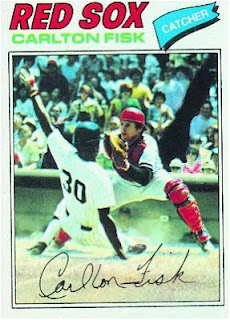 1977 Topps #640 Carlton Fisk (stolen from Baseball Card Database)
4) Which am I more likely to see in your area Rangers or Dallas Cowboy Apparrel?
Right now it would definitely be Rangers apparel.  The DFW area is a great sports “town”, but if you’re not winning, you sort of get put on the back burner.   That’s not to say there aren’t a lot of Cowboys caps and jerseys around town, but Rangers stuff is everywhere right now.
5) Which is a more important culinary achievment Texas Chili or Tesas Toast?
No question, it’s a good bowl of chili.  I’m a little bit of a sissy when it comes to spicy food, so for me, it’s all about flavor over heat.
Scorecard
First off I am glad to hear there is someone else out there man enough to admit that they prefer a flavourful Chili to a Spicy one.
Moving on to the baseball Qs, I am glad to hear that the Rangers are getting the love they Deserve in Dallas.  The NFL and the Cowboys seem to constantly be shoved in your face.  I also like PATP choices of the Catcher cards as well as his analysis of the Pitching situation in Texas.  And hey we have a Jim Sundberg Sighting - What's not to like 5 out of 5.
On Deck
We are all fired up for Opening Day with the P5 Debut of Pirates Treasure Room.
Looking Back
Philadelphia Phillies - The Phillies Room.

Good stuff - I love this series that you do!

That PATP is a swell guy.

Seriously though, I also really dig these Q & A posts.