Opening Day is less then 24 hours away and we have Pittsburgh Treasure Room in the house to get us fired up for the beginning of the 2012 season as the Phils square off against their cross state rival.  PTR is a loyal Bucos fan who already has seen the Pirates both in the grapefruit and earliar this week in the On-Deck series here in Philadelphia.
1) How often does a Pirates fan based outside of Pittsburgh get to see his favorite squad?
I subscribe to MLB.TV and get to see the Bucs play every single game that's televised.  I also have the AtBat ap on my phone so when I'm on the road I can listen to the Bucs.  As for actually going to the games, I normally try to make a weekend trip to see the Pirates play in Spring Training.  The Pirates and Phillies have been having exhibition games as part of spring training in Philadelphia for a couple years now and I normally attend at least one of those games.  I will go to see the Pirates play locally against the Phillies, Mets, and Orioles based upon the schedule and normally head out 6 hours west to PNC Park a couple times a year, normally mid summer.  There's several minor league affiliates within an hour's drive from me that I also try to check out the Pirates AA or AAA teams play a couple times a year so I can see the future Pirates in action.
2) The Pirates have struggled to win for a number of years now, Are there any players who's cards (auto/vintage) are bargains because of this?
I wouldn't necessarily say that there's any major bargains on specific players based upon the Pirates struggles over the past decades.  I do have a few player collections and think that those players are undervalued to the masses because of their time spent playing for the Pirates.  Players like Andy Van Slyke who won 5 consecutive gold gloves and does not sign TTM make his auto more rare than other gold gloved centerfielders from recent times, yet his certified autographs can always be had for less than a discount blaster.  A lot of the Pirates from the 1979 We Are Family World Championship team have rookie cards very cheap and Bill Madlock autographs can be had on average for 2 2012 Heritage packs.  That's a bargain if you ask me considering that he won 4 batting titles and was a WS Champion.  I recently picked up his rookie for $1 which I was very happy about.  Even the HOF Pirates like Kiner and Stargell seem to be undervalued, but I wouldn't call them bargains. 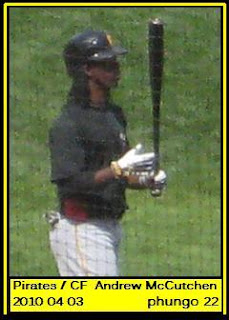 2011 Phungo #22 Andrew McCutchen
4) Does Starling Marte make is Major League Debut before or after July 20th.  And what position do you see him playing.
Starling Marte lit it up in a small sample size in spring training.  However, he hasn't played above AA and it's recommended that he continue to develop his pitch recognition in the minors due to his lack of walking and plate discipline.  I truly think that Marte's MLB debut will be based more on what the combination of Tabata, Presley, and McLouth are doing in the majors than what Marte is doing in the minors.  If all those guys are hitting .280 without striking out a lot, Marte could spend the entire season in the minors.  For the first time since the early 90s, the Pirates have a strong outfield and help coming from the minors.  If a team needs an outfielder, I suspect Presley or McLouth will be traded to make room for Marte's debut.  The nice thing about the Pirates outfield depth is that each of them can play left, center, or rightfield very well (McLouth even won a gold glove in 2008 with the Pirates).  If anyone thinks though that Marte is going to force McCutchen out of center, you're crazy.  The Pirates will keep Cutch in CF for the next 6 years barring an injury.  I know that Jose Tabata has a lot of respect for Roberto Clemente and would prefer to play right which means that Marte will likely be the left fielder if Presley or McLouth are moved to make Marte's debut.
5) Do French Fries belong on a salad?
Absolutely not!  This interview is over.
Scorecard
I love hearing about folks that make signficant trips to see their teams as often as possible.  Also enjoyed hearing Andy Van Slyke mentioned, he might not be a TTM signer, but he was always good for a funny quote during his short stint with the Phils.
I have to give PTR a red X for not enjoying Fries on a salad.  For those of you unfamiliiar the Pittsburgh Salad, is among the "healthiest" out there - distinguished by being topped with Fries and often Steak.  Regardless Pirates Treasue Room delivers a 3 for 4 performance and we will be awaiting the outcome of the Starling Marte question during the season.
On Deck
30 Year Old Cardboard will be filling us in on the brand new Miami Marlins.
Looking Back
Philadelphia Phillies - The Phillies Room.
Oakland A's - The Fuji Chronicles
Seattle Mariners - Emeral City Diamond Gems
Texas Rangers - Play at the Plate
Posted by deal at 8:21 PM

I had fun with the interview, but I'm from Jersey and we don't put french fries on our salads.