The New York Mets have listed 2009 #6 overall pick Zack Wheeler as the starter for the 2nd game of Tuesday's double header against the Atlanta Braves. 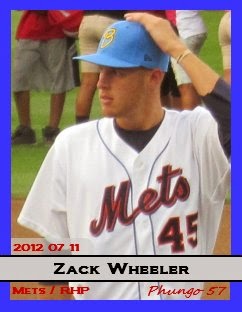 This is exciting news for the Mets, not so much for the Phillies. If Zack Wheeler turns out to be a first round talent, the Mets could potentially have two young aces (Matt Harvey being the other) at the top of their rotation for half a decade or longer.

Phungo Card
The Photo from this Phungo card was taken prior to last years AA All-Star game which was hosted by the Reading Phillies.  Unfortunatley Wheeler had pitched in the Futures Game earlier that week and did not get involved in the AA ASG.

Man, I'm glad you mentioned where the photo came from, because I was sitting there wondering "Why the heck is Wheeler wearing a Reading 'Baseballtown' cap????"