I could finish the review there but I will post some pix and thoughts. The following cards are from a rack pack of cards purchased at a local big box.  $5.99/pack plus local sales Tax (6% in PA) for an 18 card pack.

My biggest issue is 2013 Topps Archives is largely comprised of 3 designs I am not fond of, and a fourth that I find to be about average. Then there is the issue of Topps Canabalizing their old sets, and finally the whole lottery aspect of opening Archive for the more interesting whacky inserts - I do like the whacky inserts, but they won't tempt me enough to pick up a box.

I even dislike the wrapper which got favorable reviews from a couple of sources including The Shlabotnik Report which has a fine column on the derivation of the wrapper. 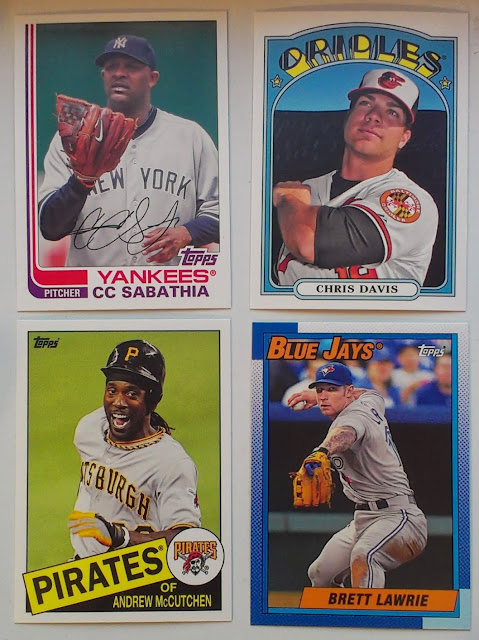 Finally, I am in the minority on this one, but 1972 Topps really doesn't do it for me.

Another Chuck-it for the rack is that there were no Phillies in the 18 cards :(

The hockey stick set (1982 Topps) is my favorite of this years four mains. CC is near the top of my list of favorite Yankees, Chris Davis is putting together a 2nd consecutive fine year for the Orioles - Kudos to O's fans for having 3 Orioles leading the early All-Star voting (Davis, Adam Jones, and .... JJ Hardy). Always good to get a McCutchen card - he is one of the good guys in baseball and a fine player.  Brett Lawrie has been on the shelf for a disappointing Jays team and unable to repeat is fine 2012 campaign 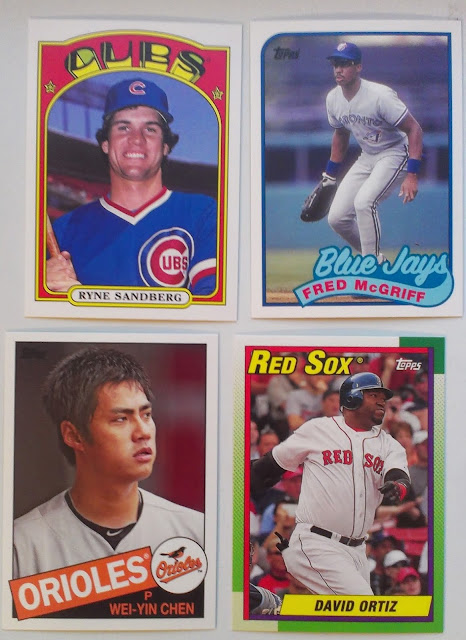 Hall of Famer Ryne Sandberg is one of the hilights of the pack.  The McGriff is a 1:4 Pack short print from the 45 card Fan Favorites hi-number series.  Chen has been on the DL for about a month, but was a nice find for the Orioles in 2012, He was a big help to the club to reach the playoffs.  David Ortiz is just keeps on chugging looks like he may e adding another fine season to his career.

There you have it - 18 cards, no Phillies, 1 short print. this is likely the only pack of 2013 Archives I will likely pick up. Chuck-It

ReWind
Phungo Review of  2012 Topps Archives.  FYI - Despite the 3 Phils I think I passed on getting any future Archives last summer and didn't go for the Hobby Box. Also liked the set selected for 2012 archives much more then 2013.

I am a fan and was pretty happy with my two boxes. Although I do have to say the inserts are my favorite part of the release and you didn't get any which is quite a bummer. If you haven't seen them, check out my post:

What would you want for the Cutch and Crime Dog cards?

Chuck it, indeed. Happy to see some of the same reasons for dismissing the set are popping up over and over. Means it's not just me.

I bought a blaster today and I saw enough. Everything non-Ranger specific will end up in someone else's house.

I'm one of the few that actually like Archives... both this year's and last year's products. Heck... I even like the football. But I'm too cheap to actually bust a box. I'll try to find a set on eBay when the dust settles and the prices drop.

I like Archives myself. Planning a post tonight. I bought a blaster and 4 packs. Pulled a Ryan Howard relic from the box.

Matthew H. I will keep the cards around, but I am not really capable of trading right now - to many other things going - will keep you in mind for Pirates Cards when I am ready.