2013 Phungo Cards #32 Matt Wieters - Banished from Topps, but Phungo has him!

Last Week Night Owl Cards had a posting regarding players banished from trading cards for contractual reasons. One of the players he mentioned that is currently in that situation with Topps is Matt Wieters. Topps 2013 Series 2 is out this week and once again Matt Wieters is not on the checker. 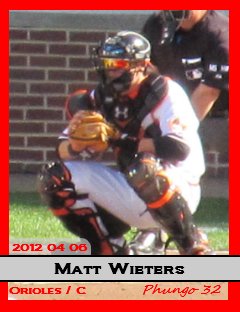 However, if you collect Phungo Cards you do not have a problem. Yes over here at Phungo we don't have to deal with silly legal issues.  We are not selling cards, so we don't have to contact MLB or the players union.  Just taking pictures and creating cards for our own amusement - so we can come up with a Matt Wieters card or Maury Wills or Barry Bonds or anyone.

Matt Weiters is card #32 in the 2013 Set. The Card# matches Wieters Uniform number - an Idea that Topps has swiped from the crack crew at Phungo HQ.  I know some folks aren't a fan of 2013 Topps numbering, but I have been doing it for years and say why not.  I do wish Topps should have stuck to keeping 6 big names on the 00 Hero numbers - there are plenty of players to award the card uni numbers.

The Photo on the card was taken on opening day of the 2012 season. Wieters was 0 for 3 that day but did record an RBI on a groundout. I like this shot, I don't sit in the outfield often so rarely get this angle. For a low end point/shoot camera like mine you can only get pix from 400 feet away during day games - there just isn't enough light at night - and I am sure this is using all of the 12x zoom that lil Canon has.

Thankfulluy, the dimensions of a baseball card are very forgiving, since I am only dealing with 2 1/2"x 3 1/2". I can get a shot of Weiters filling the entire frame even though I was nowhere near the subject when taking the photo.

2013 Topps Banished
Phungo has published at least one other player that has been banished from 2013 Topps. We also have Ichiro. Not sure if this is because of the trade or for another reason, but this is one of the few trading cards you will find of Ichiro in a Yankees uni.