The Phillies are 67 games into the season and once again it is time to admit that they are a sub .500 team.  There was a glimmer of hope a week ago when they were beating up on a poor Miami Marlins team, but this weeks road trip through the mediocre midwest Ms Milwaukee and Minnesota showed that the Phillies just can't win consisitently enough.

There have been some bright spots notably Domonic Brown, Cliff Lee, and Chase Utley pre-injury.  Another player putting together a nice season is Jonathan Papelbon. 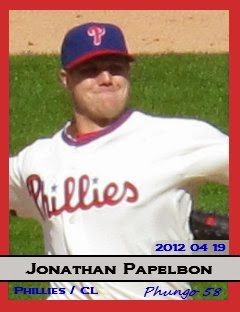 Cliff Lee got the W last night, ending a 5 game skid for the Phillies.  Jonathan Papelbon converted the save, his 12th in twelve attempts.

Papelbon is a likely an All-Star candidate for the Phillies, I always think of closers as good candidates for crummy teams, because they tend to have one good stat, on a team that may have nobody with any good numbers. As a team the sub-.500 Phillies really don't deserve a three reps, but Papelbon is likely deserving.  Beyond his perfect save rate he has a 1.52 ERA with 22Ks in 23.2 innings - His 4.9 H/9inn is particularly impressive. He also has a Walk rate that is equally low yielding a nice 0.676 WHIP.

The Phillies have a bit of a conundrum with Papelbon. He is one of their best performers the last two seasons, but they have not put themselves in postion to use him effectively. Often the offense flat out doesn't score any runs or the bullpen gives up whatever meager lead the Phillies have in the middle innings. This leaves Papelbon out of the mix far too often.

Hopefully the Phillies get some things worked out and Papelbon can help salvage their season, rather than saving games with the Detroit Tigers