This Phillies have only ever specifically picked in the #16 spot once during the June Draft. That pick was a High School Catcher out of Virginia named Trey McCall in 1985. Today we turn back the clock 27 years and take a look into that pick and the rest of the 1985 MLB Draft. 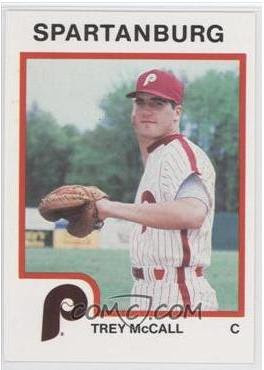 
Phillies
Unfortunately McCall never had first round impact as a player.  He spent five seasons in the Philllies system reaching as high as single A Clearwater in 1989.

1985 MLB Draft
The best player taken in the first round of the 1985 draft was Barry Bonds (#6 Pirates), The round also yielded HoF Shortstop Barry Larkin (#4 Reds).  The best first round pick after McCall was Bond's PED brethern Rafael Palmiero (#22 Cubs) other notables include Brian McRae (#17 Royals) Joe McGrane (#18 Cardinals) Gregg Jefferies (#20 Mets).  The first overall pick of the 1985 draft was BJ Surhoff by the Orioles followed by Will Clark to the Giants and Bobby Witt (Rangers).

The highest pick at catcher that made the majors was Bill McGuire who had a cup of coffee with the Mariners who drafted him 27th overall. Other notable players drafted at Cather in 1985 were Phillies Alums Todd Pratt (21 BoSox) and Lenny Webster (13 Twins), Mike MacFarlane (Rd 17 Royals - played 13 seasons, who knew?) Chad Kreuter (3 Rangers) Soctt Servais (20 Mets) Don Wakamatsu (First Asian-American Manager #4 Reds)
Trey McCall 2013

Today the former professional baseball catcher finds himself at the helm of the Emory & Henry Wasps of the Old Dominion Athletcis Conference (ODAC - NCAA D3).  McCall has been with the Wasps since 2005, This season the Wasps, based out of Emory Virginia, had a tough 9-27 season finishing last in the ODAC. Trey McCall also peforms Assistant AD duties Emory and Henry and he will spend the summer of 2013 as an assistant coach with the Cotuit Kettleers in the prestigous Cape Cod League.