The Phillies miserable midwest road trip conludes this weekend in Colorado where they will once again see First Baseman and Drunk Driver Todd Helton. 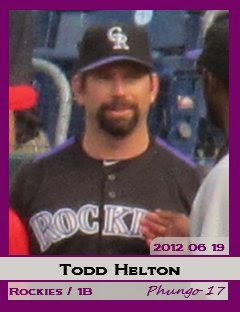 I am not sure if Todd Helton has surpassed Larry Walker as the most noteworthy of the Rockies, but he has past far by him in service time.  In fact this weekend Helton will pass Walker in Games played for the Rockies by 1000 Games. His career numbers (all with Colorado) stand at 360 Home Runs, 1371 RBIs, 2454 Hits and a Career .319 BA, with an OBP of .417 (#2 Active, #22 All-Time).

The five time all-star has won 3 gold gloves and finished 2nd for 1998 Rookie of the Year (Kerry Wood).  He has been a member of 2 Rockies Playoff Squads including the 2007 NL championship squad that eliminated the Phillies while on thier way to the Series.

Unfortunately Helton's borderline Hall of Fame career is crawling to an end.  He is merely accumulating numbers onto his peak years now, and looks like he will fall a tad short of milestons like 400 Homers and 3000 Hits.  A combination of the near miss and inflated stats from playing his home games at Coors will probably cost him a shot at the hall.

Helton is having a mediocre 2013 which is about where he has been the last 4 seasons.  He hasn't played more than 130 games since 2009. The one time perenial .300 hitter has slipped to .268 for that period which included only 35 Home Runs.

I always give a guy points for mainting a quality career with a single team, but as stated in the title I really can't forgive anyone much less a multi-millionaire for drunnk driving.  I am no angel, and may have been a bit rotten in my youth, but I just have no room for drinking and driving. Any good spirit Todd Helton earned he my book was burned this winter.

In my opinion DUI convictiions should be handled at least as harshly as PED violations. I have no idea of the status of the Helton case at this point, but I don't think a 50 game suspension for a DUI or related offense is out of line.  It is a stand worth taking for the MLB as well as the other major sports.

So he stays completely out of trouble for his entire career and one incident makes him a horrible person?

The guy made a mistake. No one got hurt, let it go. It would different if this kind of thing happened all the time with Helton, or even multiple times. But that was his only incident in his 17 year career.

I have trouble letting drunk driving go no matter the person. If there is a way we can push pro athletes to get that message out, I think it could help.

I honestly doubt Helton was wrecklessly drunk, but I don't really know. I just see it is a potential accident.

From what I know of Todd Helton he has always been a great player and member of the community, but I think it is important we not omit this error in judgement off his record.