A quick Question, What Jersey Number is Tony Gwynn wearing on this Topps Rookie Card? I did a quick search and found nothing. Does anyone have an early 80s Padres media guide that may has a 40 man roster listing Gwynn? I am a little surprised that with all the information out there, that this remains a mystery.

This week the Phillies are on the Road in Southern California, facing the Padres during the week followed by the Dodgers over the weekend. To mark the first part of the road trip we are very happy to examine the Tony Gwynn Rookie card(s) 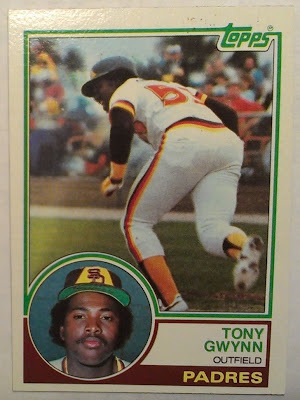 2013 marks the 30th anniversary of one of my favorite Topps Sets, 1983. I Iike the design and the dual photos. Another bonus is the impressive checklist that includes 3 HoF RCs - Gwynn, Ryne Sandberg, and Wade Boggs.

1983 is near the outset of the MLB awarding multiple trading card licenses and there are actually at least three Gwynn RCs.  Plus there is a 1982 TCMA card and the 1983 OPC Gwynn. For me I am a Topps guy and the 1983 #482 card above is the Gwynn Rookie Card.

According to Wikipedia Tony Gwynn has been battling various health issues (some weight related) but he remains active as the coach of the San Diego State Aztecs. The biggest name that Gwynn coached with the Aztecs is likely Stephen Strasburg. In 2013 Tony Gwynn's son Tony Gwynn Jr remains in professional baseball, playing at the AAA level of the Dodgers system in Albuquerque (batting .321/ .400 OBP at press time)

This makes me sick. Tony Gwynn is a first ballot Hall of Famer, His Topps Rookie Card is 30 years old and had recent auctions close as low as $2.10 Shipped! Hell, a year ago Cardboard Connection selected the card as one of the 10 most valuable RCs of the 1980s.

Why the hell would anyone buy a pack of 2013 Topps S2 when for the same price you could have Tony Gwynn's Rookie Card?  At least two other auctions ended under $3.

All 3 cards could be found multiple times for under $5 and All 3 cards are each currently available BIN under $10.

On the other end of the spectrum graded version of the cards sold as follows:

$2.10 for a Topps Gwynn rookie? That's straight up cardfoolery.