Last week there was a bit of buzz revolving around Ichiro getting 4000 hits. This led to discussions about including career hits from different leagues. These discussions included folks like Derek Jeter Minnie Minoso and of course Pete Rose. 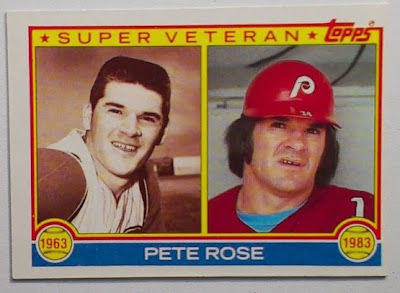 Man, Baseball-ref has everything. Even Minor League stats from 1962.  Pete Rose had 3 Minor League Seasons collecting 427 hits.  Add that to his 4256 in the Majors and you get 4683. But wait Rose also had 86 postseason hits this brings hist total to 4769 - Turns out that Rose is the All-Time combined league hit king as well as the traditional hit king. For a further look into Rose and the other players that were found to collect 4000 hits check this SABR article by Scott Simkus

1983 Phillies
By 1983 Pete Rose was 42 and his abilities were slipping.  He posted the worst batting average of his career (.245). His OPS+ was an anemic 69. Game 5 of the 83 Series was Rose's final World Series game. He played Right Field in that game.  Between 1971 and 1983 Rose had played 3 innings of RF, The Phils patchwork wheeze kids line up put him there 34 times that season.

1983 Super Veterans
Terrific set, that I had ignored until 30 Year Old Cardboard dedicated a series of postings to it.