Tonight the MLB Network is broadcasting the Civil Rights Game. This is the 7th edition of the competition which started out as a spring training exhibition prior to becoming a regular season matchup in 2009. The game was created to honor the history of Civil Rights in the US.  This years game is in Chicago and features the White Sox hosting the Texas Rangers. 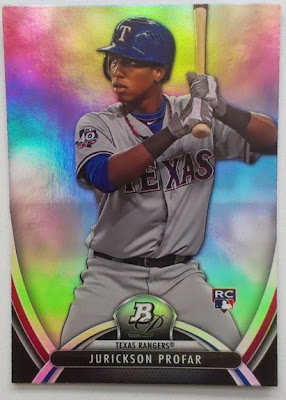 Profar's impressive 2012 debut certainly echoes that honor, he became the 3rd teenager to homer in his first Plate Appearance.  A moment noted on the flip of the above BowPlat card. 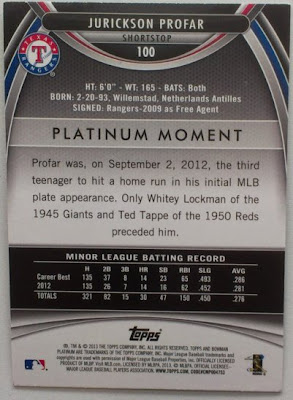 
Profar has not taken off during his rookie campaign with the flair of a Bryce Harper, Mike Trout or Yasiel Puig. In fact his bat has been less than mediocre, with a .237 BA going into the weekend and 4 Home Runs across 219 ABs. Regardless Jurickson is only 20 years old and is giving the Rangers flexibility playing 3 infield positions plus left field. Still one has to wonder if the Rangers will need to look for other options down the stretch.
Hopefully we will get to see a bit of the young prospect during tonight's contest and perhaps during the post season.

2013 Bowman Platinum
All the Bowman products run together for me, but I did want to note that the above Jurickson Profar card caught the light pretty well and reflected some pretty cool effects in the snapshot.

Card #100 has been the last card of Bowman Platinum each year since the prospect sets inception in 2010.  Despite being a rookie/prospect based product, 2013 marks the first time the sets final card has actually been occupied by a rookie card.  Previous tenants have been David Wright (2010), Ichiro (2011), and Jacoby Ellsbury (2012)