I thought 2013 Topps was a decent but not great design.  However the Design was a great pallet for the numerous colored parallels that Topps likes to put out each year.

Night Owl Cards discusses this more thoroughly in a column published this past weekend.
Topps previewed 2014 flagship a few weeks back and the cards have a similar white border as 2013, which gives us the potential for another year of good looking parallels. With the help of Pixlr team Phungo looks at some of the possibilities. 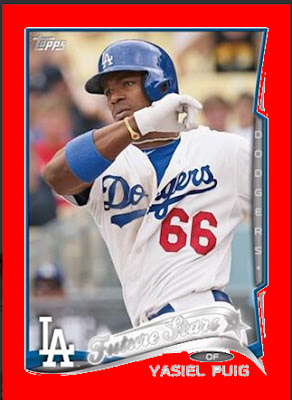 I get my cards at Target mainly because it is the most convenient big box for me. A side benefit is that they brand red and their partnership with Topps yields Red Parallels, which is a solid color for Phillies cards. However a Dodger collector may prefer Walmart. 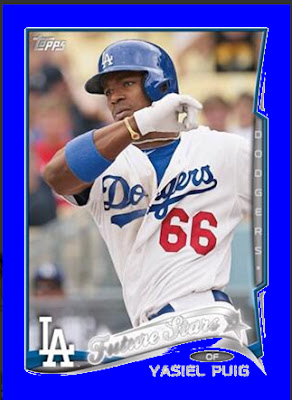 Notice that I have guessed at Yusiel Puig as card #1 for 2014 Topps.  The Base card was the first image I saw from 2014 Topps promotional material (via Cardboard Connection) - it differs a bit from the vanilla base cards carrying the "Future Stars" flag above Puig's name. This looks like a foil version of the logo used in 1987 Topps. The Futures Stars weren't at the top of the lineup in 87 Topps but I thought they may take a page out of 89 Upper Deck and Open with Future Stars in 2014. 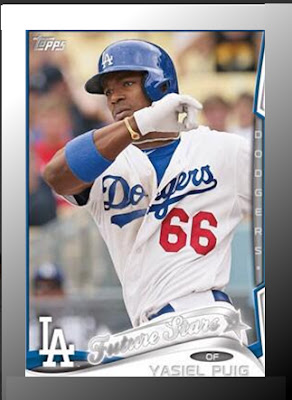 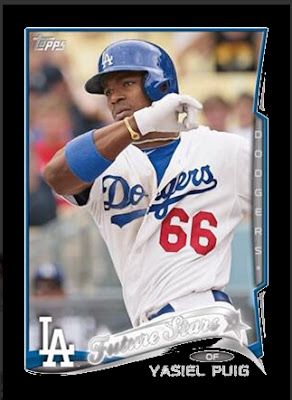 The Black Parallel would of course be serial numbered to 63. The black parallels, may actually look pretty close to this, which is pretty sharp. 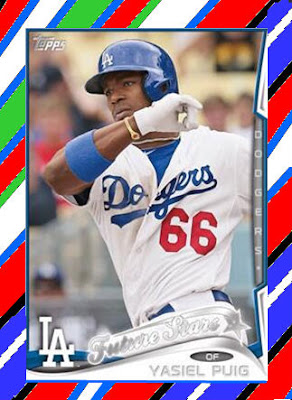 2014 Topps #1 Yusiel Puig Whacky Colors Prallel
It could happen. Who knows what Topps will do when they run out o parallel colors
Sources
Cardboard Connection
Night Owl Cards

Careful, don't give them too many ideas !!

I would like to see polka dot and barber pole

BD - If Topps uses my parallel I wan a cut of the action.