Ryno of course went on to have a Hall of Fame career.  His 16 MLB seasons included 10 all-star appearances, 9 Gold Gloves ,and 7 Silver Sluggers all at second base. Sandberg finished his career with 282 home runs. 277 of those were as a second baseman, good enough for the position record at the time of his 1997 retirement (a number surpassed by Jeff Kent in 2004). In addtion to being a threat at the plate and on defensive Sandberg was also adept on the basebaths with 344 career SBs including 54 in 1985.    .


The Cubs reached the postseason twice during Sandberg's career in 1984 and 1989. Those two season are of course both part of the Cubs long World Series drought. 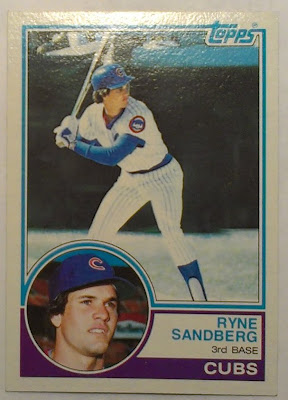 There are a number of non-mainstream Ryne Sandberg cards issued prior to 1983. These include his 1980 TCMA Reading Phillies card.  1983 featured cards from Donruss Fleer and Topps.

In off condition I found the Topps Sandberg RC for under $3.  Not sure if that is a good deal for a card that can also be found in decent condition at reasonable prices. There are a dozen auctions of this card that ended under $5.

$3 for a clean 83T Ryne Sandberg rookie? What the heck is the cardworld coming to? I'm glad I don't see these deals on a regular basis... otherwise I'd be holding onto hundreds of Sandberg rookies.

The $3 ones were in rough condition. The graded ones for under $10 surprised me though.

Sandberg is probably a little less pricy now because the Cubs are down, but still under $10 for a HOF RC in good condition? cmon.