The Phillies 10 game set versus NL West opponents closes with the Arizona Diamondbacks this weekend. The D-Backs were a candidate to win the West before the Dodgers went on their post All-Star break tear.  One of the offensive leaders for Arizona has been First Baseman Paul Goldschmidt. 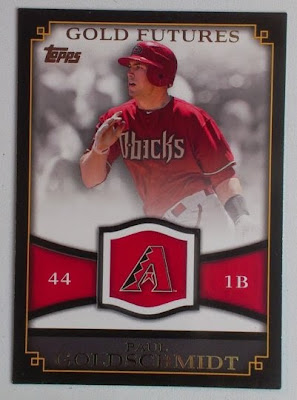 Paul Goldschmidt emerged as a power hitting First Baseman during the 2011 season. He has continued his hot hitting in 2013. Going into the Series with the Phils Goldschmidt was the league leader in Home Runs (31), RBI(100) , Total Bases, and OPS+. Those numbers were good enough to make him an All-Star for the first time.  Paul Goldschmidt will turn 26 in a few weeks and has his best hitting days right in front of him. I expect him to be an MVP candidate for the next half dozen years.

Local Kid
While looking into Goldschmidt's numbers I found that he was born in Wilmington Delaware, however according to his Wiki bio he was raised in Texas. His 59 career HRs already rank him 6th among players born in the First State.  With a decent 2014 he will surpass top total of 96 held jointly by Randy Bush, John Mabry, and Dave May.

2012 Topps Gold Future2012 Gold Rush s
The Gold Futures set is a member of the onslaught of Gold Inserts which Night Owl Cards very successfully lampooned in this column. The design is decent for a subset and carries the look of base cards from a more midline superstars set. Of course this means that one can tell that patch display factored into the design.

In Series 1 the set consists of 25 cards, devoted to upcoming prospects. Notables include Freddie Freeman, Aroldis Chapman, Anthony Rizzo, Mike Stanton, Mike Trout, Jason Kipins and Goldschmidt.  The set continues with an additional 25 players in Series 2. Matt Moore, Buster Posey, Chris Sale, Jason Heyward and Stephen Strasburg are all present in S2.  The Phillies are represented in the second set by Domonic Brown who shows up on #GF38.